As a proud graduate of Columbia University’s School of International and Public Affairs (SIPA), I was disappointed to read a recent commentary about ethanol by a research scholar at my alma mater. “A Chance to Phase Out Support for Corn Ethanol in the Renewable Fuel Standard,” by Noah Kaufman, was superficial and misguided. Rather than being based on the in-depth research and rigorous analysis to which I was exposed at SIPA, it reiterated myths about ethanol that might be found through a simple internet search.

In the years since my graduation, my work has focused on renewable fuels and agriculture. Based on this experience, let me address some of the misconceptions that were contained in Dr. Kaufman’s essay.

Misconception: “The Renewable Fuel Standard … has failed to achieve its goals of materially reducing greenhouse gas emissions or improving energy security for Americans”

Misconception: “[E]stimates suggest that emissions benefits of first-generation corn ethanol compared to petroleum-based gasoline are small … or even negative (Lark 2021)”

Facts: When all the emissions tied to making and using corn ethanol are added together, its lifecycle carbon intensity is approximately 45-50 percent lower than that of gasoline, according to researchers affiliated with the Department of Energy, Harvard University, MIT, Tufts University and other institutions. This estimate includes emissions from hypothetical direct and indirect land use changes, even though data from the U.S. Environmental Protection Agency and the Department of Agriculture show that agricultural land use has declined over the past two decades as ethanol production has expanded.

The paper by Lark et al. to which Dr. Kaufman refers has been roundly criticized by experts from the Department of Energy’s Argonne National Laboratory, Purdue University and the University of Illinois system in two separate sets of comments. In the more recent comments, the researchers stated that the work by Lark was “more problematic than what we initially evaluated to be the case.” The Renewable Fuels Association also issued a thorough rebuttal of the paper.

In real-world terms, a study by Life Cycle Associates found that between 2008 and 2020, the use of biofuels under the federal Renewable Fuel Standard resulted in cumulative savings of 980 million metric tons of carbon dioxide-equivalent greenhouse gas emissions. Ethanol accounted for a substantial majority of those savings.

On the energy security front, ethanol is domestically produced (as Dr. Kaufman noted) and accounts for more than 10 percent of the U.S. gasoline pool. In a 2019 study, energy economist Dr. Philip K. Verleger, Jr., looked at oil market shocks that have occurred since the 1973 Arab Oil Embargo and concluded that even “a modest amount of renewable fuels can significantly moderate the price impact of market disruptions.”

The production of 15 billion gallons of ethanol in 2021 displaced nearly 500 million barrels of crude oil that would have been needed to produce gasoline. In 2022, ethanol’s energy security benefits have been on full display, as the Russian invasion of Ukraine led to tight petroleum supplies in the U.S. and record prices of gasoline at the pump. Were it not for the presence of ethanol, gasoline prices would have been even higher.

Misconception: “Scaling up EVs involves big hurdles … but when combined with a clean electricity system, EVs offer the potential for climate and local pollution benefits that ethanol does not.”

Misconception: “Meanwhile, the need for a national biofuel strategy has diminished with the surge in EVs.”

Facts: In a July 2021 letter to President Biden, the producer-members of the Renewable Fuels Association committed to ensuring that ethanol reduces GHG emissions by at least 70 percent on average (compared directly to gasoline) by 2030 and that ethanol achieves a net-zero carbon footprint on average by 2050 or sooner. A study released earlier this year demonstrated that multiple pathways exist for corn ethanol to reach net zero.

According to Car and Driver, “Currently, it's estimated that around 1 percent of the 250 million cars, SUVs, and light-duty trucks on American roads are electric,” even though EV sales are increasing significantly. Additionally, the average age of vehicles in the U.S. has increased to a record 12.2 years according to S&P Global Mobility. As a result, it will take decades for enough of the fleet to be electrified (and for the electric grid to be decarbonized and expanded sufficiently) for EVs to drive down GHG emissions from light-duty vehicle transportation. In the meantime, large volumes of liquid transportation fuels will continue to be used. Why should the U.S. delay addressing the climate crisis by not reducing emissions associated with liquid fuels?

Misconception: “Corn ethanol produced in the United States is referred to as a ‘first-generation’ biofuel, which provides few emissions benefits and competes with food crops”

Facts: Studies have repeatedly shown that ethanol production has negligible impacts on food prices. In a retrospective evaluation of the economic impacts of the RFS, a team led by researchers at Purdue University used the GTAP-BIO model to analyze the extent to which the RFS and other factors affected markets during the 2004-2011 and 2011-2016 periods. They concluded that “the long-run effects of biofuel production and policy on food prices were negligible for both time periods.” 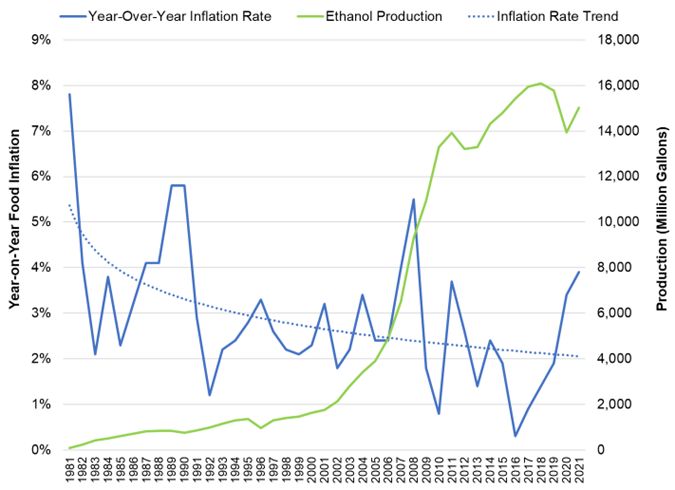 Recent food price developments were examined in a September paper by economists at the Federal Reserve Bank of Kansas City titled “Commodity Prices Have Limited Influence on U.S. Food Inflation.” The authors noted, “Food prices increased at the fastest pace in more than two decades from July 2021 to July 2022.” However, they asserted that “this increase has not been driven by commodity prices but by an increase in consumer spending on food at home and increases in costs along the supply chain.”

Misconception: “The country’s fuel supply infrastructure and vehicle engines are not universally compatible with gasoline that consists of more than about 10 percent ethanol, which is the composition of most gasoline sold in the United States today. … [D]omestic ethanol production has roughly stalled since this 10 percent ‘blend wall’ was approached a decade ago.”

Facts: E15, a fuel comprised of 15% ethanol and 85% gasoline, is legally approved for use in model year 2001 and newer cars, light-duty trucks, medium-duty passenger vehicles and flex-fuel vehicles. More than 9 out of 10 cars, trucks and SUVs on the road are approved by their manufacturers to run on E15, accounting for 97% of the unleaded fuel sold in the U.S. The problem has not been the so-called blend wall, but rather the inconsistent implementation of the RFS that has caused retailers and other fuel supply chain participants to hesitate to offer E15 and make related infrastructure investments.

Dr. Kauffman notes that “biofuel mandates (which are expressed in volumes of fuel) in recent years have aligned with gasoline consisting of roughly 10 percent corn ethanol to not overshoot the previously mentioned ‘blend wall’ of compatibility.” He should have said that biofuel mandates as implemented have aligned in this way, whereas the actual RFS statutory requirements were designed to result in the blending of increasing levels of biofuels over time.

Most recently, during the Trump Administration the EPA massively increased small refinery exemptions from the RFS, effectively reducing biofuel usage requirements. In Figure 2, the ethanol blend rate, which is the national average content of ethanol in gasoline, is shown on a 12-month moving average basis in order to smooth the effects of monthly fluctuations. The blend rate increased steadily for the first half of the last decade, then stalled in the period during which large-scale SREs were granted, and has resumed its climb over the last couple of years as SREs were again restricted. The 12-month average hit a record 10.41 percent in August 2022, the latest month for which data are available. (For an individual month, the blend rate has been as high as 10.88 percent.) 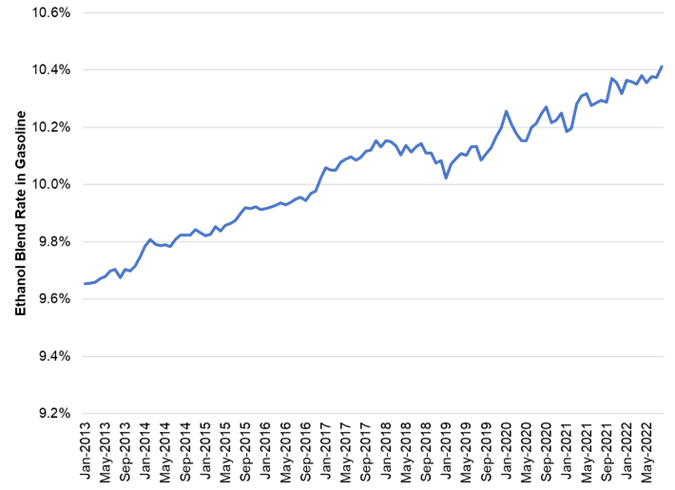 Just last week, the U.S. Energy Information Administration published an article titled “Fuel ethanol blend rates reach record-high summer levels in 2022.” The agency noted, “In response to the high blend rate this summer, we raised our forecast for the average 2022 fuel ethanol blend rate from 10.3% to a record 10.4% in our November Short-Term Energy Outlook.”

Misconception: “RFS requires the blending of biofuels whether or not it is cost-effective to do so”

Facts: The use of ethanol toward the RFS lowers the price that consumers pay for gasoline, in two ways:

Specific to E15, an RFA analysis determined that additional volumes of the blend that were used this summer saved American drivers $57 million. E15 was available at a substantial discount at a time when gasoline prices hit a record $5/gallon. On a national basis, the discount averaged $0.30/gallon from June 1 to September 15, according to E15prices.com. Moreover, refineries were operating at very high utilization rates, making E15 a particularly effective option. Ethanol is produced at facilities across the Midwest and is blended to produce finished gasoline close to the consumer, whereas additional crude oil processing was constrained by the tight refinery capacity.

A more in-depth review of the evidence about ethanol demonstrates that it expands the fuel supply, lowers consumer expenditures on gasoline and reduces emissions. Hopefully, my SIPA colleague will take this to heart and consider doing additional research on ethanol—or perhaps he will reach out to me for a discussion of the full picture before making policy recommendations in the future.