Building Upon the RFS with Low Carbon, Clean Fuel Policies

Reduction in carbon emissions has become a central policy concern and RFA sees tremendous potential for ethanol’s role in low carbon initiatives. RFA has been taking a leading role in developing policies such as Low Carbon Fuel Standards/Clean Fuel Standards (LCFS/CFS) at the state and federal level, and Carbon Capture, Utilization, and Sequestration (CCUS).

The Administration and Congress are heavily focused on climate and reducing carbon emissions. While the RFS has created a durable policy foundation for biofuels to reduce GHG emissions from the transportation sector, complementary policies could deepen and accelerate the role for biofuels in decarbonization.

Low carbon fuel standards, or clean fuel standards, already employed in different forms by several states and nations, work by requiring reductions in average carbon intensity on an annual basis across the transportation sector. RFA has several priorities related to such initiatives:

Several western states already have LCFS policies in place where ethanol’s carbon reduction is already a substantial part of meeting their carbon reduction goals. Similar systems are currently being evaluated by states in the Midwest and elsewhere. Furthermore, RFA is involved in discussions of a federal Clean Fuel Standard that could be central to meeting the Administration’s climate goals.

Share of GHG Emissions Reductions Under the LCFS, by Fuel Type: 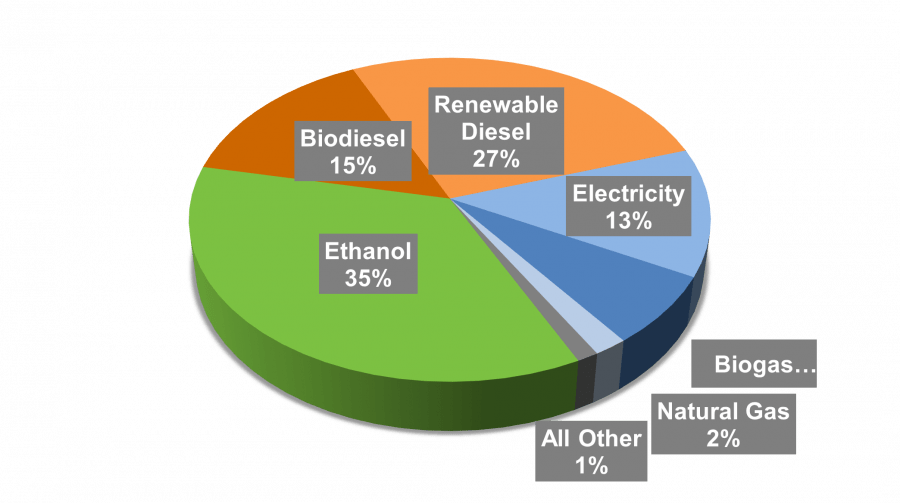 Another reason the ethanol industry’s contribution is vital to achieving a net zero energy future is the emergence and potential of Carbon Capture, Utilization, and Sequestration (CCUS). CCUS technology. CCUS systems can either capture carbon created in the production process or pull it straight from the open air. Incentives for deployment of these systems present a terrific ROI for meeting climate goals.

When combined with the extensive advancements in agriculture technology that allow the plant to sequester more carbon, CCUS is part of the path to net zero, or even net negative GHG emissions from ethanol.

Reduction in carbon emissions is a top priority of the ethanol industry. RFA is committed to leading the transition to net zero carbon emissions. Today’s ethanol already reduces greenhouse gas (GHG) emissions by 52 percent, on average, when compared directly to gasoline. Some of our members are already providing GHG savings of up to 65-75 percent.  RFA's fact sheet spotlights recent research and data proving that ethanol is an immediate solution for cutting greenhouse gas emissions from transportation.

But this is only the beginning. Given the urgency of the climate crisis, the producer members of the Renewable Fuels Association have committed to the pursuit of the following carbon performance goals: 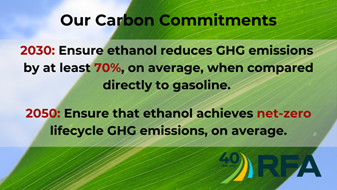 hether for 2030, 2050, or beyond, low carbon and net zero ethanol is essential to meeting carbon goals. Additionally, as a low carbon fuel, ethanol can help to decarbonize more than light-duty transportation alone. RFA is pursuing new and existing opportunities in biochemical refining, sustainable aviation fuel, heavy-duty applications, electricity generation and more.  Ethanol’s carbon savings can be tapped today and can work alongside electrification and other low carbon fuels as the nation transitions to a net zero carbon emission future.

The Science Is In

An RFA analysis using the U.S. Department of Energy’s own Argonne GREET model found that the use of ethanol in gasoline in 2020 reduced CO2-equivalent GHG emissions from the transportation sector by 47.3 million metric tons. That’s equivalent to removing 10.1 million cars from the road for an entire year, or eliminating the annual emissions from 12 coal-fired power plants. Improving the lifecycle emissions of ethanol will only improve this figure moving forward.

Research from Environmental Health & Engineering Inc., released in late January, shows that greenhouse gas emissions for ethanol are 32 percent to 62 percent lower than gasoline, with a central best estimate of 46 percent.

Also in January, a study by Life Cycle Associates confirmed that the Renewable Fuel Standard has resulted in aggregate GHG reductions from the use of biofuels that exceed the EPA’s original projections. The RFS, as expanded in 2007, has resulted in cumulative CO2 savings of 980 million metric tons. This is due to the greater-than-expected savings from corn-based ethanol and other biofuels and occurs even though cellulosic biofuels have not met legislative targets. In addition, LCA research indicates GHG emissions from petroleum are higher than the EPA baseline.