Blog Posts
The Truth About Ethanol and Carbon Emissions

There’s been a lot of talk—and a lot of confusion—recently about corn ethanol’s carbon footprint. Before being retracted due to “flawed interpretation of data” and “inaccurate estimates of carbon emissions,” a September 8 Reuters article initially asserted that the carbon emissions related to making ethanol are worse than the emissions from making gasoline.

How could that be? How could Reuters possibly reach that initial conclusion before withdrawing their story? What’s the truth?

Unfortunately, Reuters took the same flawed and misleading approach to examining ethanol’s carbon footprint that many other biofuel critics and opponents have taken in the past. Like other erroneous attacks on ethanol’s carbon benefits, the Reuters article failed to look at the full carbon lifecycle for ethanol, while also failing to make appropriate comparisons amongst different fuel types.

To understand the true carbon benefits of ethanol, you first need a proper understanding of the carbon footprint associated with producing and using gasoline—the fuel that powers most automobiles around the world today. As shown below, when all of the emissions tied to making and using gasoline are summed up, the fuel typically has a lifecycle carbon intensity of about 98.5 grams (g) of CO2-equivalent greenhouse gases per megajoule (MJ) of energy delivered.

By comparison, when all of the emissions tied to making and using corn ethanol are added together, the fuel typically has a lifecycle carbon intensity of about 53.3 g/MJ. Thus, the lifecycle carbon intensity of today’s ethanol is about 46 percent lower than gasoline’s carbon intensity. This estimate for corn ethanol even includes emissions from hypothetical direct and indirect land use changes, even though data from the U.S. Environmental Protection Agency and Department of Agriculture show agricultural land use has declined over the past two decades as ethanol production has expanded. While some analysts include these unproven land use change emissions in corn ethanol’s carbon footprint, they often ignore and exclude indirect emissions effects from the carbon footprint calculations for other fuels.

An important feature of ethanol’s carbon lifecycle is the fact that combustion emissions (i.e., when the fuel is burned in the engine) are near zero. That’s because the amount of biogenic CO2 emitted from the tailpipe when ethanol is burned in the engine is the same amount of CO2 that was removed from the atmosphere by corn plants at the beginning of the process (biorefineries also release biogenic CO2 during fermentation of starch into ethanol).

What about the lifecycle CO2 emissions associated with using an electric vehicle (EV)? Well, that’s where things get more complicated. If an EV is using 100 percent nuclear or renewable electricity (like wind or solar), and if the minerals in that EV’s battery were mined using low-energy and non-invasive practices, then the full lifecycle carbon emissions tied to using electricity in that EV could be as low as 2 or 3 g/MJ. If, on the other hand, the EV uses electricity generated by coal, natural gas, or other fossil fuels (which provide 60 percent of U.S. electricity today), and if the minerals used in the battery were mined using typical (i.e., more intensive) practices, then this EV could have a carbon footprint well over 100 g/MJ—making it a worse option for the climate than petroleum.

Notably, these carbon intensity estimates are adjusted to account for the fact that EV drivetrains are generally three times more efficient per unit of energy than internal combustion engines using liquid fuels. In other words, a normal EV drives three times further per megajoule of electricity than a conventional vehicle drives using one megajoule of liquid fuel. 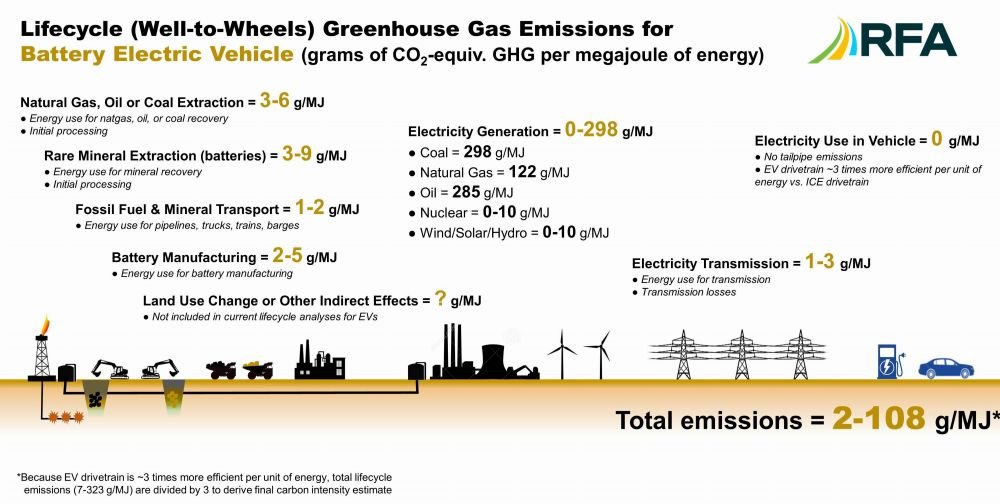 So, where did Reuters go wrong in its analysis? The reporter made lots of mistakes, but perhaps the biggest flaw in the article was its fixation on just one step in ethanol’s full carbon lifecycle. As shown below, Reuters purposely chose to compare only the emissions from converting corn into ethanol at a typical biorefinery to the emissions tied to refining crude oil into gasoline at a petroleum refinery. The reporter drew a narrow circle around just one part of the supply chain and chose to ignore everything else. Using this flawed accounting gimmick, Reuters claimed that ethanol emissions were twice as bad as petroleum emissions, even though a quick look at the complete lifecycle paints a much different picture.

Consistency matters. If the same Reuters approach were taken to electricity and EVs, one would naturally conclude that EVs are a poor transportation choice for drivers looking to reduce their carbon impacts. Indeed, as shown below, if only the emissions from fuel production are considered and all other upstream and downstream emissions are ignored, fossil-generated electricity (which accounts for 60 percent of U.S. generation) would appear to be nine to 20 times worse for the climate than petroleum. This example underscores the dangers of focusing too narrowly on just one part of a fuel’s carbon lifecycle. 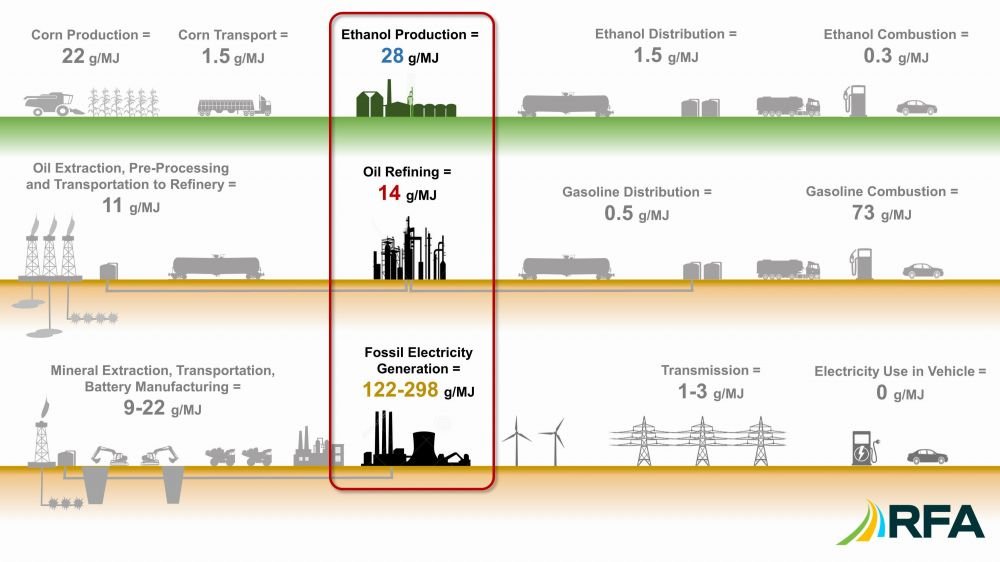 Accounting gimmicks and selective analytical boundaries can mislead policymakers and consumers in other ways as well. For example, many proponents of EVs promote them as “zero-emissions vehicles” based on the fact that EVs have no tailpipe emissions. While it is accurate to say EVs have no tailpipe CO2 emissions, it is disingenuous to ignore all of the upstream emissions associated with mineral extraction, battery manufacturing, electricity generation and transmission. Looking only at emissions from the tailpipe is really no better than looking only at emissions from the fuel production facility. Again, a comprehensive view of the full lifecycle is necessary.

If tailpipe emissions were really all that mattered, then it could be argued that ethanol is also a “zero-emissions fuel.” That’s because, as described earlier, the tailpipe CO2 emissions associated with burning ethanol are biogenic and fully offset by CO2 absorption during photosynthesis by the feedstock. 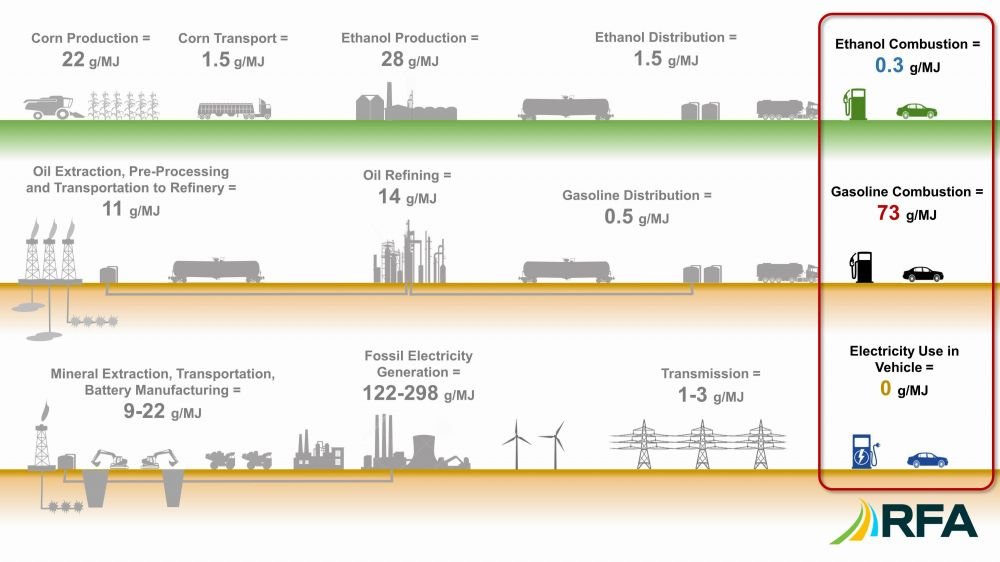 One of the reasons we do lifecycle carbon analysis is to identify steps in the supply chain where carbon performance can be improved. While corn ethanol is already 40-50 percent less carbon intensive than gasoline, opportunities exist for significant near-term improvements in ethanol’s carbon performance.

More carbon-efficient farming practices could result in substantial reductions in the emissions associated with crop production. And at the biorefinery, greater integration of bioenergy and the adoption of carbon capture, utilization, and sequestration (CCUS) technologies could rapidly shrink ethanol’s carbon footprint. CCUS alone has the ability to entirely offset all of the GHG emissions at a typical ethanol biorefinery. When taken together, climate-smart farming practices, CCUS, and substituting renewable energy for fossil energy at biorefineries can result in corn ethanol that has net zero lifecycle carbon emissions—or is even carbon negative.

Zero-carbon corn ethanol isn’t an idealistic aspiration or a far-fetched concept. The members of the Renewable Fuels Association have pledged to achieve a net-zero carbon footprint by 2050 or sooner and they are already making strides toward fulfilling that commitment. However, reaching net-zero emissions will require fairness and integrity in lifecycle analysis and honesty in discussions—and reporting—about the carbon impacts of different fuels.