Following an April 12 announcement by President Biden, the U.S. Environmental Protection Agency issued a series of emergency waivers allowing E15 (gasoline containing 15 percent ethanol) to be sold during the 2022 summer driving season. Without this action, E15 could not have been used in most of the country from June 1 to September 15. An analysis by the Renewable Fuels Association found that an additional 194 million gallons (mg) of E15 were sold during the summer as a result of the Biden administration’s waivers, saving American consumers $57 million.[1]

Prior to 2019, many fuel retailers found it difficult or impossible to offer E15 during the summer in conventional gasoline markets, due to outdated fuel volatility regulations.[2] In Minnesota, the only state that reports monthly E15 sales volumes, Department of Commerce data show that average E15 sales per station per day fell by approximately half during the June-August period compared to the prior three months each year from 2016 to 2018.

But on May 30, 2019, the EPA issued a regulation that allowed E15 to be sold year-round. As a result, E15 volumes in Minnesota were stable that summer rather than falling. During the summer of 2020 volumes rose by nearly a third compared to the prior three months, which had been affected by pandemic-related restrictions.

However, in 2021 the D.C. Circuit Court of Appeals ruled in favor of oil refiners who had sued EPA over the E15 regulation. The court overturned the rule, meaning the summertime barrier to E15 sales would be reinstated. Despite the decision being published in early July, retailers were allowed to sell E15 for the remainder of the summer as appeals of the court decision were considered. Because sales were allowed to continue, E15 volumes in Minnesota were 15 percent higher from June through August 2021 than during the prior three-month period.

Following the Russian invasion of Ukraine in February 2022, crude oil and retail gasoline prices surged, prompting the Biden Administration to ban imports of crude oil and petroleum products from Russia and to announce the emergency waivers for E15 in order to extend fuel supplies.

Impact of the Waivers 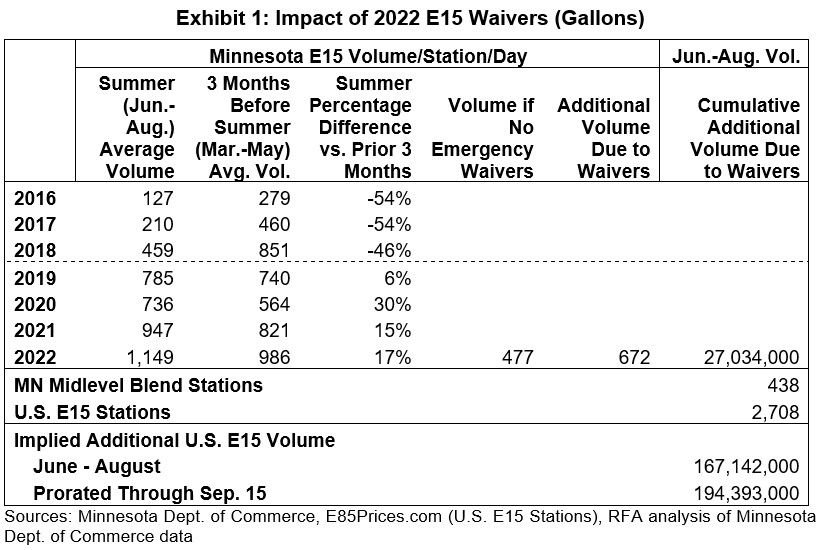 Moreover, the waiver came at a critical time. In mid-June, the national average price of gasoline hit $5/gallon for the first time. Refineries were operating at very high utilization rates, making E15 a particularly effective option since ethanol is produced at facilities across the Midwest and is blended to produce finished gasoline close to the consumer, whereas additional crude oil processing was constrained by the tight refinery capacity.

Given that 16 percent of the stations offering E15 in the U.S. are located in Minnesota, it is estimated that 167 mg were sold nationally as a result of the waivers. Prorating this through September 15 (i.e., the end of the summer volatility control period), total additional summertime E15 sales due to the waivers are estimated to have reached 194 mg. This estimate may be conservative, as E15 retail stations outside of Minnesota may have higher actual daily sales volumes than Minnesota stations.

Moreover, E15 was priced at a significant discount to regular E10 gasoline throughout the period. From June to August, the average discount in Minnesota was $0.25/gal according to the DOC, and the discount was $0.32/gal nationally according to E15prices.com. On a national basis, the average was $0.30/gal from June 1 to September 15. This equated to a savings of over $3.40 each time a driver filled up with E15.

Considering the additional E15 volume sold at a discounted price, U.S. consumers saved $57 million from June through mid-September. Minnesotans alone saved $7 million through the end of August. It should be noted that these estimates were adjusted for the marginally (approximately 1.3%) lower fuel economy of E15 compared to E10. 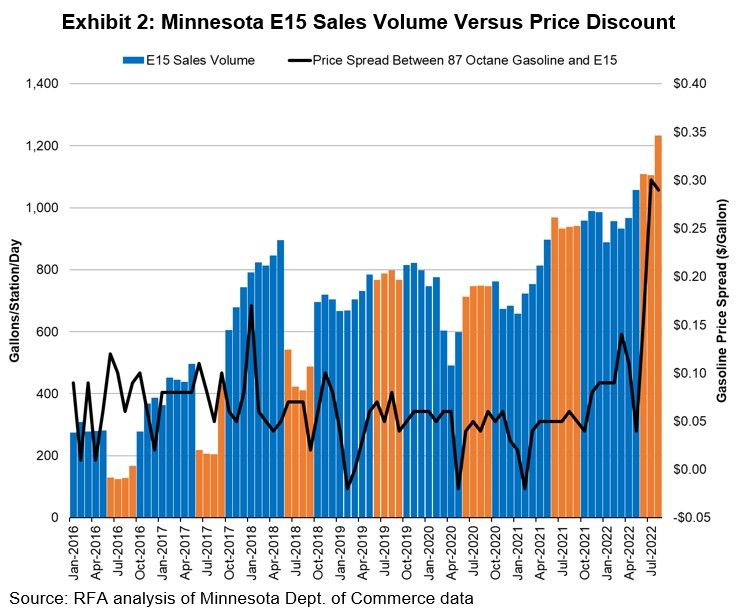 Instead of E15 sales falling during the summer driving season as occurred prior to 2019, sales increased significantly in the summer of 2022, while overall gasoline consumption was stagnant. Furthermore, E15 was available at a substantial discount to regular unleaded gasoline at a time of record prices. In addition to the economic benefits, using E15 in place of E10 reduces greenhouse gas emissions by about 3%, and E15 also reduces emissions of the pollutants that lead to ground-level ozone and smog. Thus, by extending the fuel supply at lower cost and with reduced emissions, E15 has been a win-win-win choice for American drivers in 2022.

[1] Savings were adjusted for the fuel economy of E15 versus E10. Recent testing by the University of California-Riverside found that average fuel economy for 20 light-duty vehicles was 1.3% lower on E15.

[2] E15 is legally approved for use in light-duty vehicles manufactured after the year 2000, which account for more than 96% of the vehicles on the road today.

[3] Monthly data are available through July. August consumption (product supplied) was based on weekly estimates and the average differential between monthly and weekly estimates for June and July.