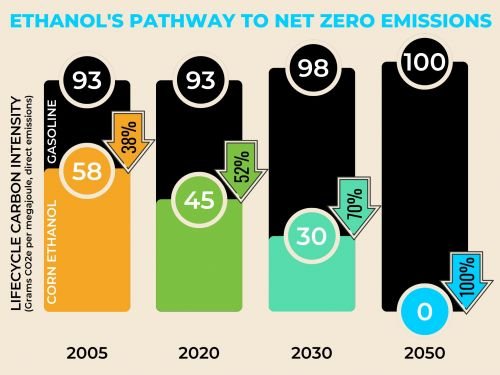 Leaders from around the world are gathering over the next two weeks in Egypt for the 2022 United Nations Climate Change Conference, also known as COP27. As governments and businesses consider options for reducing global greenhouse gas emissions and combatting climate change, the Renewable Fuels Association has a simple message for COP27 delegates: Ethanol is a low-carbon renewable fuel available today to help meet climate goals—and it’s well on its way to net-zero carbon emissions in the not-too-distant future.

“We’re excited about ethanol’s ability to significantly lower carbon emissions across the transportation sector and beyond,” said RFA President and CEO Geoff Cooper. “Lower-cost, lower-emitting ethanol is already cleaning up motor fuel around the world, and as we look to the future, ethanol can also play a leading role in sustainable aviation fuel or even generating electricity. It is our hope that U.S. policymakers ensure ethanol and other renewable fuels are an important part of the discussions at COP27. More and more national capitals across the globe are rightfully looking at the value of renewables like ethanol to sustainably fuel their vehicles and power their green economies.”

In 2021, RFA’s producer members unanimously committed to producing ethanol that reduces greenhouse gas emissions by at least 70 percent by 2030, compared to gasoline. By 2050, RFA’s members pledge to ensure that ethanol achieves net-zero lifecycle greenhouse gas emissions, on average. This past February, RFA released a report identifying five distinct workable pathways to net-zero corn ethanol by 2050, based on a set of 28 emissions reduction actions that were considered.

In a recently published article, Cooper pointed out how news media and others typically misunderstand or wrongly portray ethanol’s carbon benefits. Too often, they fail to look at the full carbon lifecycle for ethanol, or they make inappropriate comparisons among different fuel types, as happened in a controversial Reuters news article that was retracted after significant pushback from RFA and its allies.

“Zero-carbon corn ethanol isn’t an idealistic aspiration or a far-fetched concept,” Cooper concluded. “However, reaching net-zero emissions will require fairness and integrity in lifecycle analysis and honesty in discussions—and reporting—about the carbon impacts of different fuels.”