Ethanol's Use in Boats, Motorcyles, UTVs and Small Engines

Today, renewable fuels like ethanol make up more than 10 percent of our gasoline supply and can be found at nearly every gas station in the country.

Renewable fuels like ethanol have been used in engines for more than a century. In fact, Henry Ford designed his 1908 Model T to operate on ethanol. Since 1980, and the birth of the modern U.S. ethanol industry, trillions of miles have been driven on ethanol-blended fuel.

Ethanol is a win for all Americans. It’s more affordable than traditional gasoline, reduces harmful vehicle emissions, supports nearly 300,000 American jobs and protects America’s energy independence. Today, ethanol is being used in all engine types, including automobiles, off-road engines, marine engines and motorcycles. And ethanol is a proven performance fuel. It is the fuel of choice for NASCAR, IndyCar and American LeMans. Ethanol has an octane rating of 113 and helps boost the octane level of gasoline, which produces a better option for your engine, typically at a lower cost per mile. 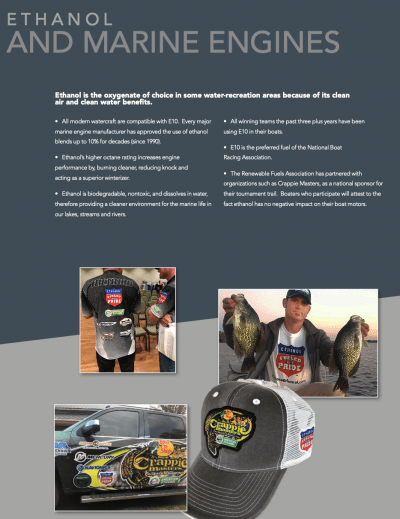 All major marine manufacturers including Honda, Kawasaki and Mercury Marine, allow the use of gasoline containing up to 10 percent ethanol (E10) in their products. E10 is the fuel preferred by the National Boat Racing Association and the Renewable Fuels Association is a proud co-title sponsor of the  Crappie Masters Tournament Trail.

What Boaters Using Ethanol Are Saying

“I’ve used it all my life, ever since I started fishing… and we run a lot of fuel through the boats. It’s got a big savings and riding on a high dollar fuel would cost you so much more. We don’t have any problems with it, it works great for us.”  Billy Don Surface, Professional Crappie Angler

As is always the case with different fuels, there are some basic maintenance strategies that can be employed when using E10 to mitigate any possible fuel-related issues. For example, some marine manufacturers specify certain precautionary actions such as a water separator filter and include fuel storage guidance like draining the tank at the end of the season and using a fuel stabilizer. Typically, maintenance issues encountered by boaters are a result of residual fuel deposits being cleaned by the ethanol in the fuel or, as is the most prevalent case, improper fuel storage and handling conditions that have allowed the uptake of water during storage. Proper maintenance, vigilance over the performance of the engine, planning, and communication with marina operators can help to mitigate any impacts boaters may encounter with the switch to ethanol blended fuel.  Click here  for information on winterizing your boat after E10 use.

It should be noted, there have been isolated reports of materials compatibility issues in some vintage (pre 1980) watercraft.  Ultimately, your watercraft operator’s manual should be consulted.*

All mainstream manufacturers of power equipment and snowmobiles permit the use of gasoline blended with up to 10 percent ethanol in their products. Tests completed on lawnmowers, chainsaws, weed trimmers and blower vacs with ethanol fuels showed no engine failures, no unscheduled maintenance and good performance. To help clarify any questions, the RFA has put together The Use of Ethanol-Blended Fuels in Non-Road Engines.  Check your owner’s manual for further guidance.

Ethanol has been used in UTVs and ATVs for decades.  This handout includes information regarding the use of fuel containing up to 10% ethanol, as well as options for conversion kits that allow for higher ethanol fuel use.