U.S. ethanol exports swelled 23% to 140.0 million gallons (mg) in March 2019, according to government data released this morning and analyzed by the Renewable Fuels Association (RFA). This is the sixth straight month that exports have exceeded 100 million gallons.

Brazil was our top trading partner for the fourth straight month, purchasing a substantial 65.7 mg of U.S. ethanol and representing nearly half (47%) of our March export market. This reflects an 81% increase over February and the largest monthly shipment to Brazil in twelve months. Exports to Canada also surged 33% to 22.7 mg (16% of the global export market). India pared back on U.S. ethanol imports, decreasing 30% to 10.5 mg. Other significant importers include Switzerland (9.1 mg), Peru (5.5 mg), and the Philippines (4.9 mg).

March exports of U.S. undenatured fuel ethanol broadened 36% to 92.2 mg. Brazil was the largest importer with 65.7 mg, up 81% and representing 71% of the market. Switzerland made a record purchase of 9.1 mg after only previously dabbling in our market, while Peru purchased 5.5 mg. 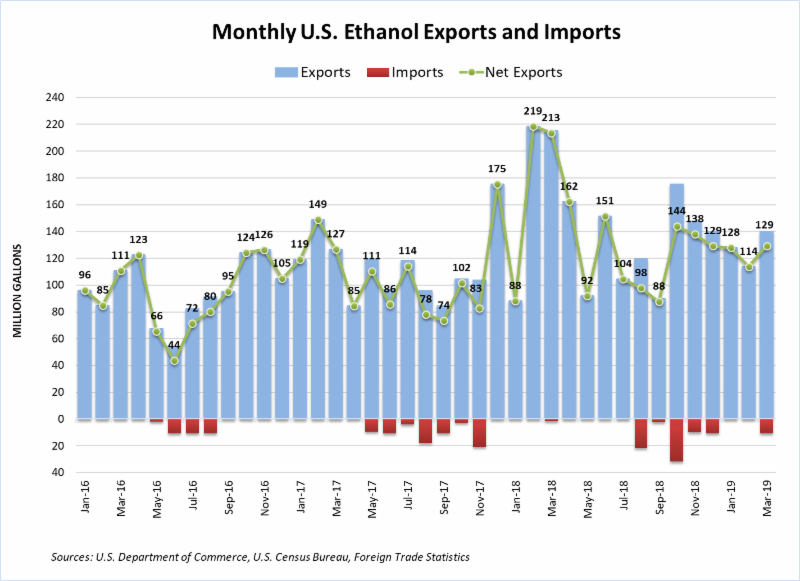 We are the leading trade association for America’s ethanol industry, working to drive expanded demand for American-made renewable fuels and bio-products worldwide.