March 5, 2021 — American shippers rallied at the start of the year with ethanol exports surging 48% ahead of December volumes to 164.6 million gallons (mg). This marks a record-high for January exports. Three-quarters of shipments were destined for just five countries, with spikes in purchases by India and China sufficient to supplant Canada as our largest customers. India imported nearly ten times its December offtake, buying a record 53.2 mg. China boosted its imports by 81% to 22.7 mg—more U.S. ethanol imported by the country than in 2020 alone and its largest draw since Feb. 2018. Shipments crossing the border to Canada scaled back 19% to an eight-month low of 18.5 mg. Brazil more than doubled its imports of U.S. ethanol to 17.5 mg. The Philippines boosted its imports of U.S. ethanol by 147% to 13.5 mg, the largest volume since Oct. 2018. Other larger markets included Colombia (10.0 mg, up 43%), South Korea (9.9 mg, down 23%), and Nigeria (8.9 mg, up from near-zero).

January was the first time in eight months that the U.S. did not log foreign ethanol imports.

In February, RFA released trade summaries for the U.S. ethanol industry in 2020. You can find these publications here. 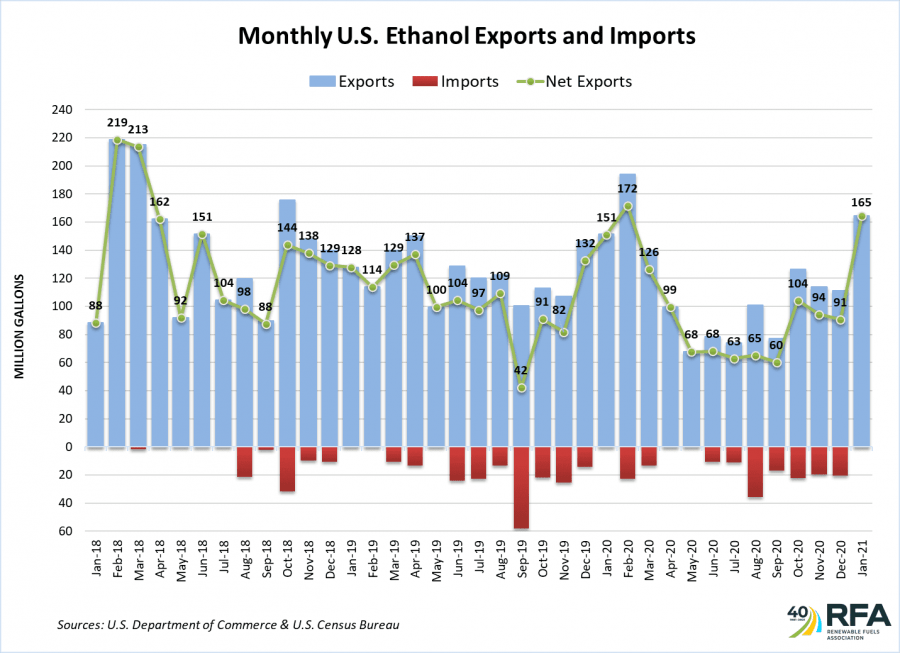