April 2, 2020 — U.S. ethanol exports intensified in February, continuing the upward trajectory kicked off in December. Global sales surged 28% higher to 194.2 million gallons (mg)—up 71% from year ago volumes for the highest monthly volume in two years. Robust sales in Brazil (56.1 mg), India (47.6 mg—a record high), and Canada (29.4 mg) did much of the heavy lifting with 7 of every 10 gallons landing in those countries in February. Elevated ethanol sales for the first two months of the year implied an annualized export pace of 2.07 billion gallons.

Exports of U.S. denatured fuel ethanol bounced back after declining to a three-month low in January. Shipments increased north of the border, with Canadian imports up 21% to 28.4 mg. India imported a record 28.1 mg (up from 1.6 mg), while South Korea (8.7 mg), Colombia (6.0 mg), Peru (4.2 mg), and Mexico (3.8 mg) accounted for the residual exported gallons.

Exports of U.S. ethanol for non-fuel, non-beverage purposes jumped 72% to an eleven-month high of 12.8 mg thanks to India’s purchase of 10.0 mg of denatured product. Canada and South Korea were our other larger customers.

The U.S. imported 22.5 mg of cane ethanol from Brazil after taking a month off. On an annualized basis, the pace during the first two months of the year would equate to 135.2 mg. 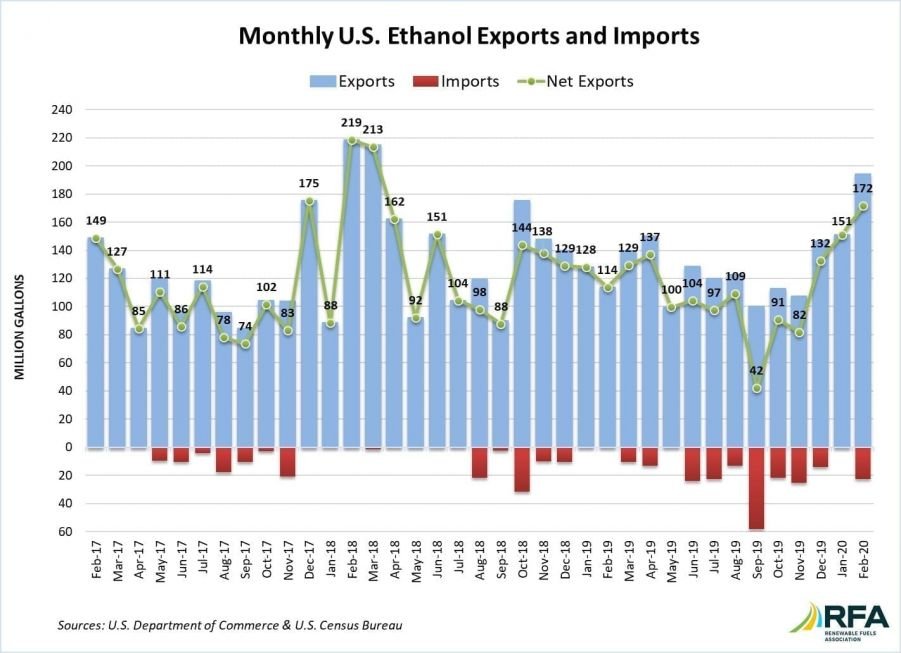