December 5, 2019 – U.S. ethanol exports picked up in October, increasing 13% to 112.8 million gallons (mg), according to data issued today by the government and analyzed by the Renewable Fuels Association (RFA). Gains made in sales to India and midsized customers more than offset a reduction in shipments to Brazil and, to a lesser extent, Canada.

Canada was the top destination for the sixth consecutive month, despite a 7% decrease to 30.0 mg (27% of total U.S. ethanol sales in October). Exports to India at 17.7 mg (16% of global U.S. ethanol sales) were the largest in four months. U.S. ethanol exports to Brazil weakened, moving 33% below September sales to 11.7 mg for a five-month low. Brazil’s harvest and processing of sugarcane continued at a robust pace in October, and the Brazilian government implemented a restriction on the volume that can enter the country duty-free through February under the tariff rate quota. U.S. shippers also sent sizable volumes to Honduras (a record 10.9 mg), South Korea (9.3 mg, +4%), Colombia (8.5 mg, up more than 6 mg from September), and the European Union (8.3 mg, -16%).

Total year-to-date exports of U.S. ethanol stand at 1.22 billion gallons. This implies an annualized export volume of 1.46 billion gallons which, if realized, would be the second-largest volume on record.

Exports of U.S. ethanol for non-fuel, non-beverage purposes bounced back from a two-year low, up 5.8 mg to 7.8 mg. American shipments of undenatured product were distributed among a handful of countries, to include Nigeria (2.9 mg), Japan (1.3 mg), and Canada (1.0 mg). Most of the denatured ethanol for non-fuel, non-beverage purposes landed in Canada (28.5 mg), Colombia (7.2 mg), and South Korea (5.7 mg).

Imports from Brazil remained elevated as the U.S. purchased 21.9 mg of sugarcane ethanol in October. The U.S. has imported more ethanol from Brazil than it has exported to the country for three of the last four months for which data has been reported. Total U.S. ethanol imports for the first ten months of the year stand at 163.9 mg—nearly triple the volume imported last year during the same period. In fact, year-to-date U.S. ethanol imports have already surpassed collective volumes entering our borders over the past three years. 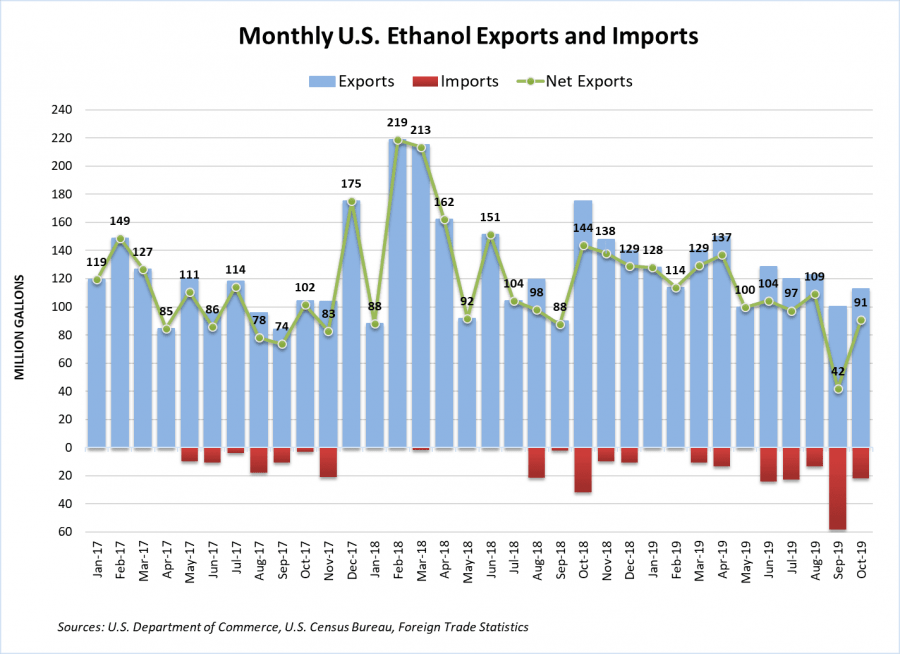