October 4, 2019 – U.S. ethanol exports moved 2% higher to 122.5 million gallons (mg) in August, according to data issued by the government and analyzed by the Renewable Fuels Association (RFA). U.S. shippers secured a record high for the month of August, with exports up 2.5% from year-ago volumes.

Canada was the top destination for the fourth consecutive month despite an 11% decrease in shipments, coming in at 31.1 mg. India purchased 17.6 mg of U.S. ethanol after essentially withdrawing from our market in July. Exports to Brazil gained traction after July’s drop, with 17.1 mg (+8%) shipped to the country. These three markets accounted for over half of U.S. ethanol exports in August. Exports to the European Union increased, most notably to the United Kingdom (10.5 mg—the largest volume since May 2017) and Finland (7.1 mg—the largest volume since May 2012), although shipments to the Netherlands (3.7 mg) fell by 67%. A record 3.0 mg was shipped to Australia. Meanwhile, South Korea (5.7 mg, -42%) and Colombia (3.0 mg, -68%) pared back. Total year-to-date exports of U.S. ethanol stand at 1.00 billion gallons. This implies an annualized export volume of 1.50 billion gallons which, if realized, would be the second-largest volume on record.

The U.S. imported ethanol from Brazil for the third consecutive month, with purchases of 13.3 mg—42% lower than July. Total year-to-date imports stand at 83.9 mg. The U.S. is on pace to import the largest volume of foreign ethanol in six years, and according to EIA data and trade press reports, imports from Brazil have picked up since the end of August. 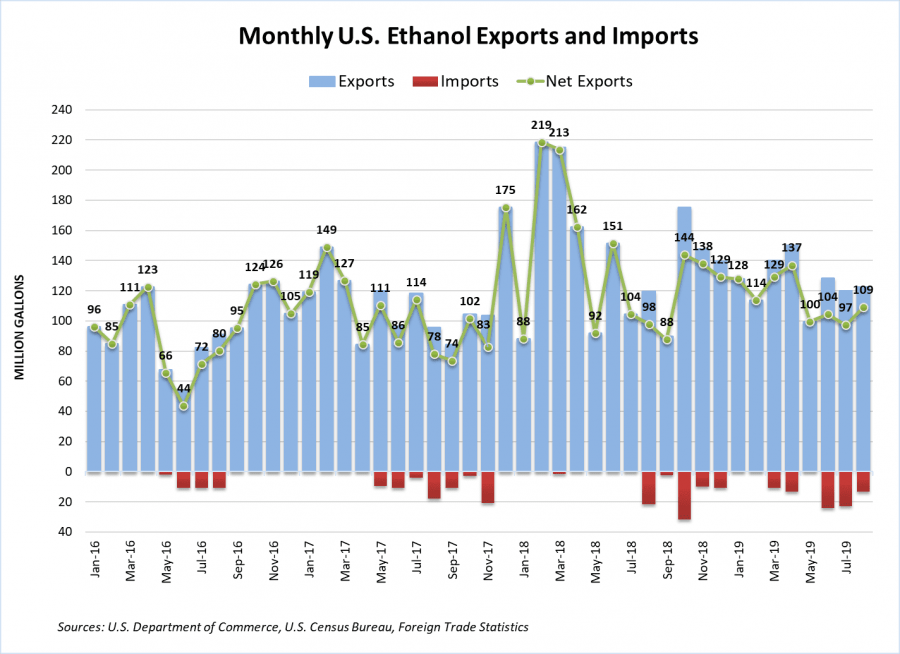