U.S. ethanol exports totaled 127.9 million gallons (mg) in January, according to government data released this morning and analyzed by the Renewable Fuels Association (RFA). This reflects an 8.5% decline from December and the lowest monthly volume in four months, but it represented an increase from the 88.3 mg shipped in January 2018.

Brazil remained the top U.S. customer for the second straight month at 38.5 mg, buying 3% more than in December and capturing 30% of global sales. India’s purchase of U.S. ethanol more than doubled (108%) in January at 20.0 mg. Canada sharply reduced its U.S. imports at 19.97 mg (-29%), its smallest purchase in a year. Exports to South Korea ticked up to 13.5 mg, while Colombia expanded to a record 9.5 mg. These five countries accounted for roughly 80% of January exports of U.S. ethanol.

American producers exported 53.5 mg of denatured fuel ethanol in January, 4.7% under prior month sales. U.S. shipments to Canada weakened by 28% to 18.9 mg. Exports to India intensified to 10.7 mg following an absence of activity in December, effectively nabbing its second-highest monthly offtake. Colombia also stepped up with record U.S. imports of 7.6 mg, up 165%. South Korea (5.7 mg, down 55%) and the Philippines (4.5 mg) were other significant destinations.

January was absent of any fuel ethanol imports for the first time in six months. Imports have averaged less than 6 mg per month over the past four years. 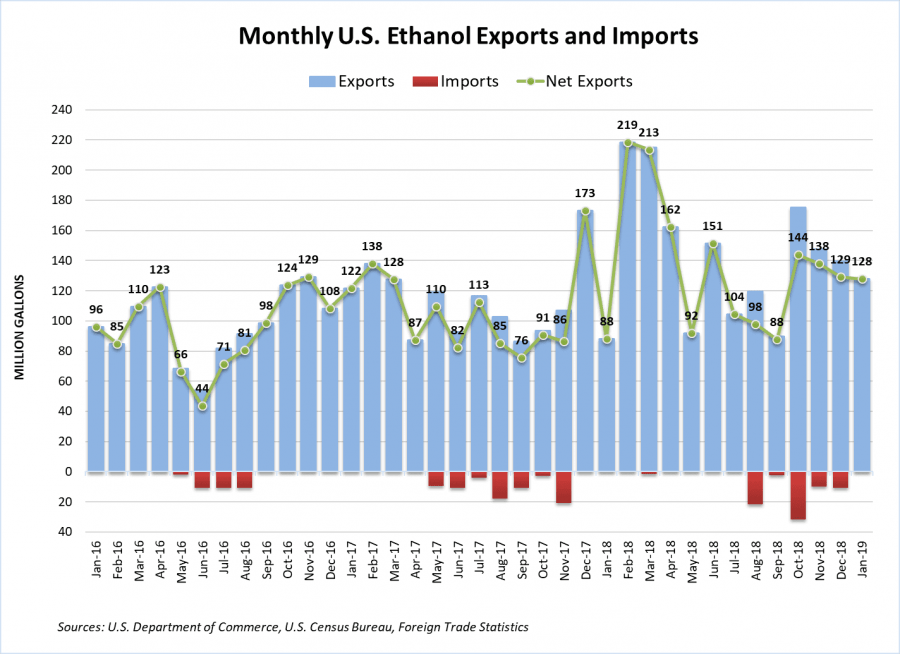