U.S. ethanol exports totaled 175.4 million gallons (mg) in October, according to government data released this morning and analyzed by the Renewable Fuels Association (RFA). This is nearly double (up 95%) September exports and the third highest monthly total on record—only surpassed by February (218.7 mg) and March (215.1 mg) of this year. Shipments were bolstered by the strongest demand for American ethanol in six months by Brazil.

A widespread shuffling of customers occurred in October with Brazil bumping Canada to capture the position of top U.S. customer. Brazil imported 54.5 mg—up 49.1 mg and representing 31% of U.S. export sales—as the sugarcane harvest began to wind down. Canada decreased its offtake by 12%, importing 30.7 mg or 18% of U.S. ethanol shipments in October. India boosted its purchases of U.S. ethanol to a record 29.1 mg for a 17% hold on American ethanol exports. Sales to these three countries represent two-thirds of all shipments in October. The Netherlands (10.4 mg, down 10%), the Philippines (10.2 mg, up from 1.1 mg), South Korea (7.7 mg, up 4%), and the United Arab Emirates (7.7 mg, up 4%) were other top markets. Additionally, exports to Peru doubled in October to 6.2 mg in advance of the announcement of countervailing duties on U.S. ethanol by the Peruvian government in November. Total year-to-date U.S. ethanol exports rose to 1.42 billion gallons—30% higher than the same period last year, and already a record with two months left to go in the year.

American producers shipped 91.4 mg of denatured fuel ethanol in October, a 35% increase and the highest volume on record. Despite a 7% decrease from the prior month, Canada retained a sizable lead as our top customer at 30.4 mg, or 31% of our export market for denatured product. Brazil purchased 13.0 mg (14% of sales), the second-largest monthly volume of U.S. denatured fuel ethanol on record for the country. The Netherlands (9.0 mg, or 10% market share), the United Arab Emirates (7.7 mg), South Korea (6.6 mg), and Peru (6.2 mg) were other significant markets.

October sales of ethanol for non-fuel, non-beverage purposes backed off 54% from the prior month to 4.3 mg. For the first time, Sweden was the lead customer of U.S. exports of undenatured non-fuel product with purchases of 1.7 mg (representing 91% of global product sales in October). Remaining international sales were parsed out to another fourteen countries. Most export sales (98%) of American denatured non-fuel ethanol crossed the border into Canada, equivalent to 2.4 mg.

The United States imported 31.6 mg of undenatured ethanol from Brazil in October. This is the largest monthly volume to enter in five years. Total year-to-date U.S. ethanol imports stand at 57.0 mg—essentially all sourced from Brazil. This is 2% ahead of last year at this time.

October exports of U.S. dried distillers grains with solubles (DDGS)—the main animal feed co-product generated by dry mill ethanol plants—were 1.018 million metric tons (mt). While shipments tapered slightly (1%), this was the fifth straight month that global demand breached 1 million mt. Mexico was again our top customer with 16% of global shipments, equal to 159,985 mt for a 7% increase over September. Asia remained a key destination for U.S. DDGS with the largest volumes heading to Vietnam (112,948 mt, up 1%), Indonesia (96,379 mt, up 43% to a record high), Thailand (92,959 mt, down 1%), and South Korea (81,351, down 22%). The United Kingdom and Ireland purchased a combined total of 105,224 mt, with the UK capturing record monthly imports (58% higher from September). Canada (62,982, up 13%) and New Zealand (a record 42,503 mt, up 19%) were other sizable markets. Year-to-date U.S. DDGS exports are 9.98 million mt, implying an annualized total of 11.97 million mt. If realized, U.S. distillers grains exports would capture the second-largest annual volume on record. 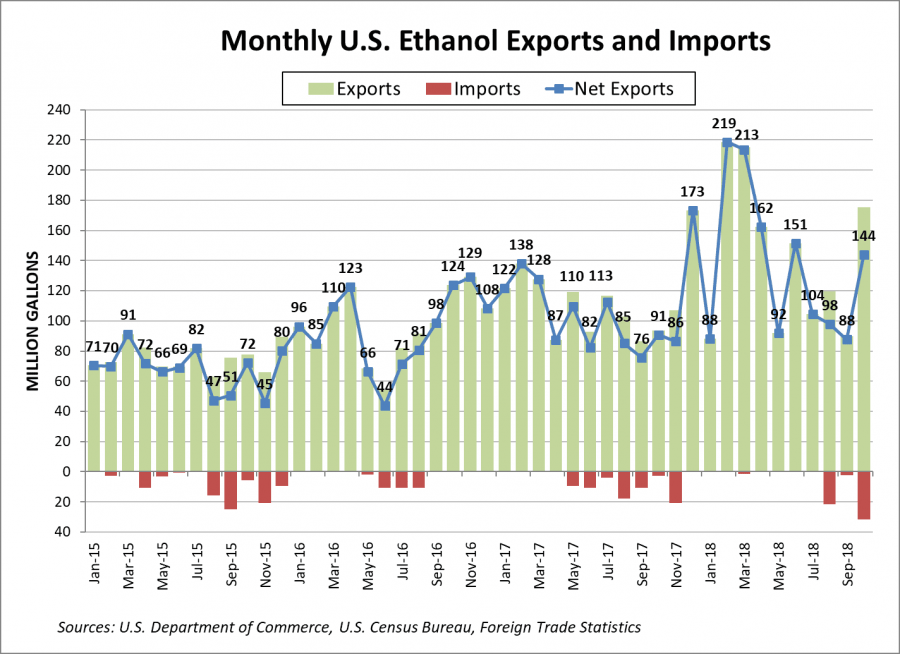