U.S. ethanol exports totaled 89.9 million gallons (mg) in September, according to government data released Friday morning and analyzed by the Renewable Fuels Association (RFA). This reflects a 25% drop from August and the lowest monthly volume in a year. Still, by historical standards, September was a relatively strong month for exports, with the brightest spot being a return of meaningful exports to Brazil.

September exports of U.S. undenatured fuel ethanol plummeted 45% to 13.4 mg, the lowest volume in 52 months (since May 2014). Brazil and South Korea reappeared on the scene after a month’s hiatus to buy 5.3 mg and 4.8 mg, respectively. While smaller than normal, those volumes represented roughly three-fourths of all undenatured ethanol exports. Other markets for undenatured fuel product included the Netherlands, which scaled back imports by 84% to 1.8 mg, and Mexico, which slimmed down to the lowest volume in 8 months (1.3 mg, down 36%). The Philippines and India (which has been running an average monthly total of about 9 mg this year) were noticeably absent from the undenatured fuel ethanol export market in September.

American producers shipped 67.1 mg of denatured fuel ethanol in September, a 22% decrease following near-record volumes in August. Top customer Canada boosted imports by 18% to 30.4 mg for a 45% market share. Malaysia (13.4 mg, up 14%), the Netherlands (9.7 mg, up 44%), and Colombia (5.5 mg) also increased their imports of denatured fuel product. Peru, Jamaica, South Korea, and the Philippines were other significant markets. Absent in September was the United Arab Emirates, which bowed out following a 15 mg draw the prior month.

September sales of ethanol for non-fuel, non-beverage purposes slipped 3% to 9.4 mg. Saudi Arabia was the lead customer of U.S. exports of undenatured non-fuel product for the third straight month, despite a 26% decrease to 1.5 mg. Japan purchased 1.4 mg—the first substantial imports of that product to date. Sales of denatured non-fuel ethanol to Canada maintained impressive growth as September exports (4.5 mg) were roughly four times higher than January. South Korea at 1.3 mg was responsible for much of the remaining volumes shipped in September.

The United States imported 2.2 mg of undenatured ethanol from Brazil in September. Total year-to-date imports stand at 25.4 mg, implying an annualized total of 33.8 mg. However, it is expected that October will show larger import volumes.

Exports of U.S. dried distillers grains with solubles (DDGS)—the animal feed co-product generated by dry mill ethanol plants—were 1.028 million metric tons (mt). While September saw an active market—American shippers dispersed DDGS to 35 countries—exports declined for the first time in five months (down 11%). The largest market was again Mexico at 149,408 mt, representing 15% of U.S. global sales. This was the second straight month of diminishing volumes heading south of the border following peak sales this year in July. Vietnam (111,900 mt, up 2% from August), South Korea (105,548 mt, down 17%), Thailand (94,235 mt), and Indonesia (67,461 mt, down 23%) were other prominent markets. Additionally, the United Kingdom and Ireland have shown notable interest in U.S. DDGS since August. Meanwhile, exports to Turkey have waned significantly since July (down 78%) when it was our top customer. Year-to-date DDGS exports are 8.96 million mt, implying an annualized total of 11.95 million mt. If realized, this volume of U.S. distillers grains exports would be the second-largest annual volume on record. 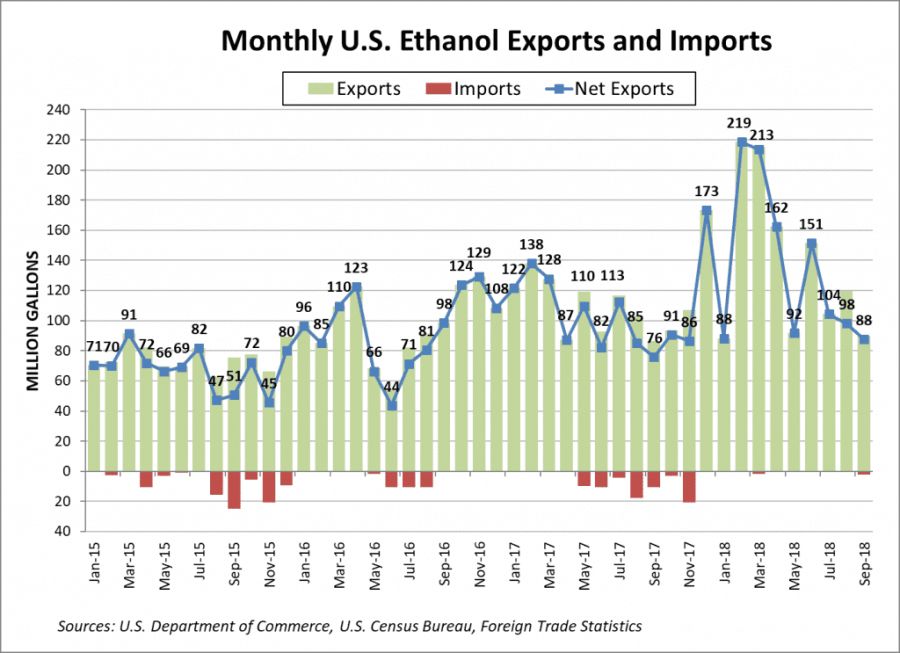