U.S. ethanol exports totaled 119.5 million gallons (mg) in August—up 15% from the prior month, according to government data released this morning and analyzed by the Renewable Fuels Association (RFA). A new and varied cast of characters has appeared on the horizon with both Brazil and China finally dormant in our export market. In fact, five of the top 10 importers had no imports on the books in July.

For the second month in a row, Canada was our top customer importing 30.0 mg in August for a quarter of U.S. global ethanol sales. However, our neighbor pared back purchases for the first time this year as 20% less ethanol moved across the border in August. The Netherlands stepped up to the plate after a quiet July with 17.6 mg in purchases (representing 15% of the market) for the country’s largest monthly purchase since Oct. 2011. The United Arab Emirates (UAE) re-entered the market with 15.0 mg in ethanol shipments—its largest purchase in 46 months. These top three customers brought in just half (52%) of all U.S. ethanol shipped out of the country, with another dozen scooping up remaining volumes. Total year-to-date U.S. ethanol exports stand at 1.15 billion gallons, implying a record annualized total of 1.73 billion gallons.

Shipments of U.S. undenatured fuel ethanol in August contracted for the second straight month, shaving off another 19 mg (-44%) to 24.3 mg—primarily reflecting Brazil’s final withdrawal from the marketplace. Sales were split among just four countries as 10.9 mg (45%) went to the Netherlands, 8.4 mg (34%) shipped to India, and Norway and Mexico brought in 2.2 mg and 2.1 mg, respectively. The Philippines (with shipments running an average of 5 mg per month in 2018) and South Korea were noticeably absent in August.

August sales of ethanol for non-fuel, non-beverage purposes expanded 12% to 8.7 mg—more than double the year-ago volumes. American producers shipped 7.5 mg of denatured non-fuel product, an 84% increase over July. Transborder shipments to Canada pushed higher to 4.1 mg—representing the country’s largest monthly purchase since April 2012—while intermittent partner Nigeria purchased 3.3 mg. August exports of undenatured non-fuel product were half of July volumes at 2.2 mg. Saudi Arabia was the lead customer for the second straight month, responsible for 89% of commitments. Remaining volumes were parsed out to multiple countries.

In August, the United States imported 23.1 mg of undenatured ethanol—the second month this year for substantive volumes and the largest monthly purchase in 35 months (24.9 mg entered our borders in Sept. 2015). Undenatured ethanol was supplied in August by Brazil (21.6 mg) and Guatemala (1.6 mg). Total year-to-date U.S. ethanol imports stand at 24.7 mg, implying an annualized total of 37.1 mg. 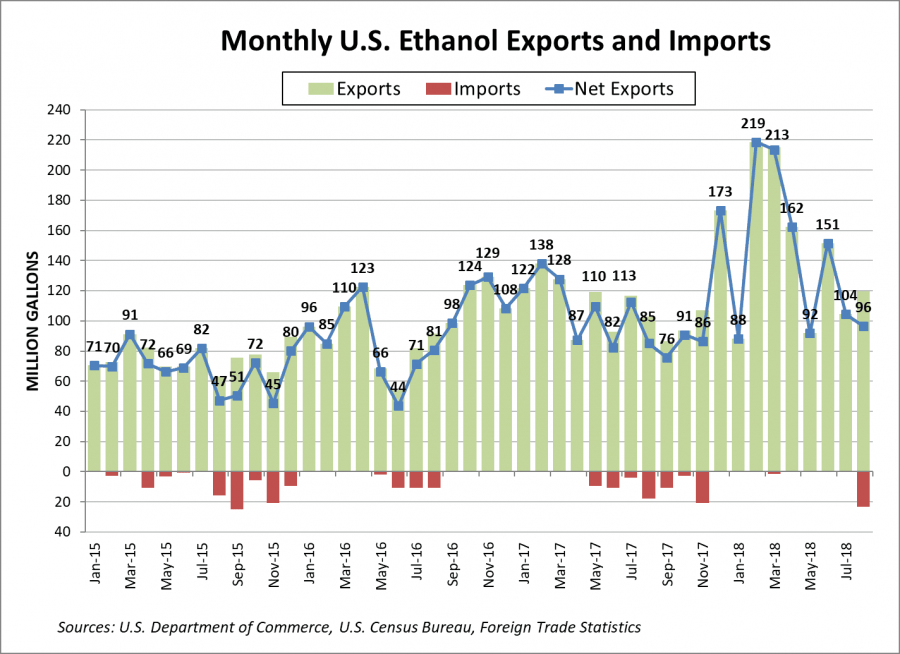