U.S. ethanol exports totaled 104.4 million gallons (mg) in July—down 31% from the prior month and 11% below year ago levels, according to government data released this morning and analyzed by the Renewable Fuels Association (RFA). Canada stepped ahead of Brazil as our top export market with 37.4 mg imported in July, capturing 36% of the global export market. This was a 12% rise in trans-border shipments and the sixth consecutive month of U.S. import growth for Canada. Meanwhile, monthly ethanol export volumes to Brazil have vacillated significantly over the past year, peaking in February (103.2 mg) and bottoming out in May (9.5 mg). Volumes again were buoyed in June before tumbling 47% to 18.8 mg in July (18% of the global export market). July saw weak demand from India, our third-largest market, with imports falling 57% to 11.6 mg (11% market share).

Shipments of U.S. undenatured fuel ethanol in July retreated 46% to 43.3 mg. Brazil was the top undenatured fuel ethanol customer at 18.8 mg (43% of exports); however, this represents a 42% decline from June and a 78 mg-drop from February during the inter-harvest period for sugarcane. U.S. exports to India thinned by 38% to 11.6 mg (27% share). On the upside, South Korea bolstered its undenatured offtake by 49% to 4.8 mg—the largest influx in 16 months. Other significant importers were Spain (3.5 mg), the Philippines (2.6 mg), and Mexico (1.8 mg).

July exports of U.S. denatured fuel ethanol slipped 10% to 52.4 mg, reflecting the Philippines’ withdrawal from the marketplace after sizeable imports (10.9 mg) in June. Two-thirds of all July shipments arrived into Canada, equal to 52.4 mg. This was 9% greater than June and the most substantial volume to cross that border in 12 months. The island of Cyprus pulled in 5.9 mg of denatured fuel, having purchased U.S. product only once before (March 2018). Columbia (5.1 mg), Peru (5.0 mg), and South Korea (3.3 mg) also had accelerated demand.

July sales of ethanol for non-fuel, non-beverage purposes narrowed by 31% from the record high set in June; nonetheless, American producers exported a substantial 8.7 mg. July exports of undenatured non-fuel product recovered from June’s collapse to yield a six-month high of 4.6 mg. Saudi Arabia was responsible for 95% of overseas commitments. U.S. exports of 4.1 mg denatured non-fuel product were equivalent to just a third of June’s record volume. With India out of the picture after importing 7.9 mg in June, Canada (4.0 mg) was our only significant market in July.

According to the monthly data, July was essentially absent of any fuel ethanol imports. As a result, just 1.6 mg of Brazilian ethanol has entered the United States in 2018, compared to more than 24 mg at this point last year. 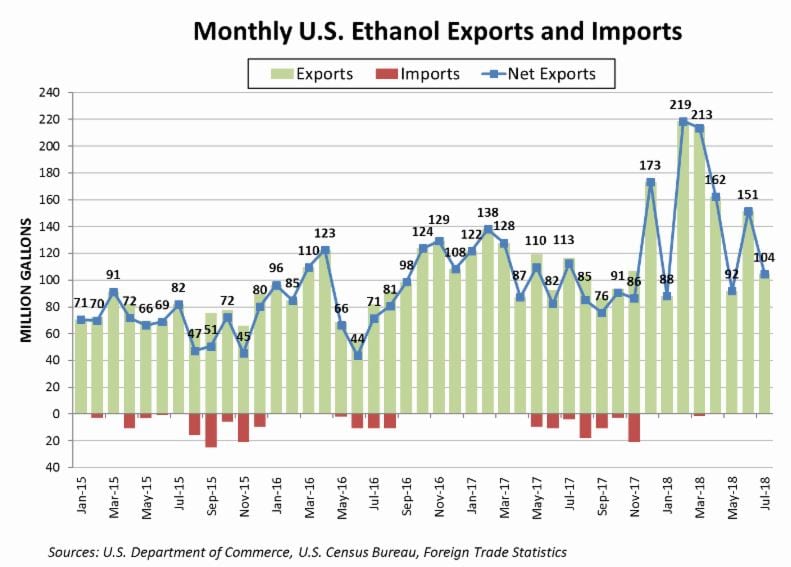