U.S. ethanol exports totaled 151.5 million gallons (mg) in June—up 65% from the prior month and in line with the monthly average for 2018, according to government data released last week and analyzed by the Renewable Fuels Association (RFA). Brazil resumed its position as the largest export market with 35.7 mg (24% of total ethanol exports), nearly quadrupling its May volume. Canada was close on Brazil’s heels with 33.5 mg imported in June—up 5%—and securing 22% of the U.S. ethanol export market.

Seven of the top 10 export markets saw growth in June. Exports to India surged to 26.7 mg—more than four times the volume shipped in May and its second-largest monthly imports on record. For the second straight month, shipments to the Philippines nearly doubled, surging to a record high of 19.1 mg in June (13% market share). The Netherlands imported 11.4 mg for its largest volume in six months. A record 4.3 mg was exported to Malaysia, and Jamaica boosted its offtake to 3.1 mg. Among markets that saw a decrease in export volumes were South Korea (6.8 mg, down 19%), Colombia (3.7 mg, down 27%), and Mexico (1.9 mg, down 47%). Notably, after 27 straight months as a customer, Peru stepped out of the U.S. ethanol export market altogether following a record buy (12.7 mg) in May.

June sales of ethanol for non-fuel, non-beverage purposes grew 25% to the largest monthly volume on record. American shippers more than doubled exports of denatured non-fuel product at 12.3 mg, besting the record set seven months ago by over 3 mg. India accounted for two-thirds of the export market at 7.9 mg. Canada decreased its purchases by 9% to 2.9 mg, losing its grip as our largest customer for the first time in nine months. Most of the remaining denatured, non-fuel exports headed to South Korea (1.4 mg). Shipments of undenatured non-fuel product winnowed down 95% to just 335,031 gallons, the lowest volume in 14 months. Top importers were South Korea and Mexico.

June was essentially absent of any fuel ethanol imports. As a result, just 1.6 mg of Brazilian ethanol has entered the United States in the first half of 2018, according to the monthly data. 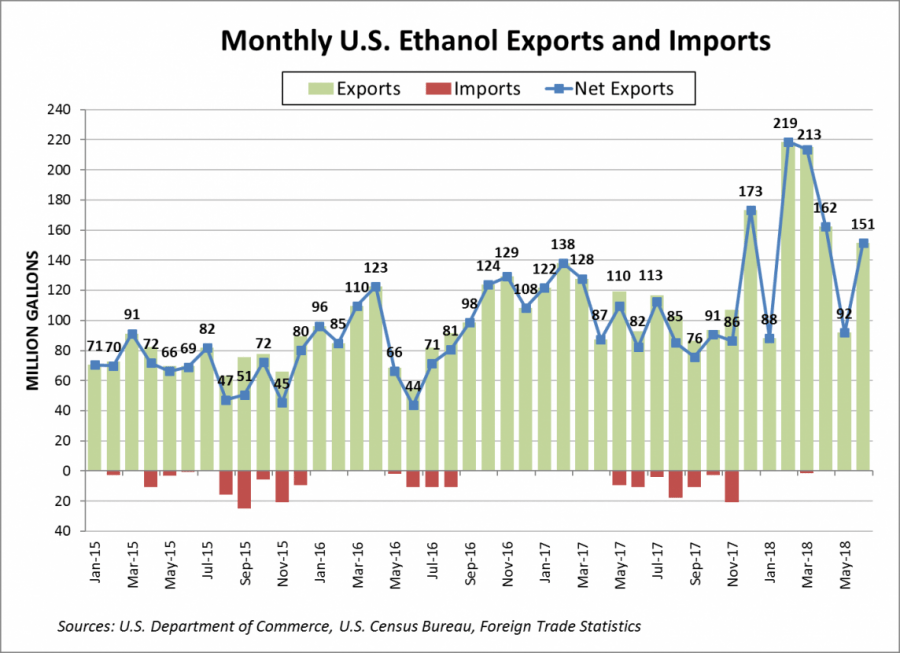