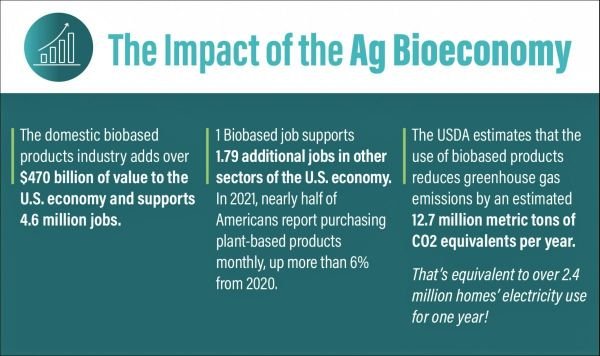 The Renewable Fuels Association announced today that it has joined the Ag Bioeconomy Coalition, a group of leading industry associations committed to developing and expanding the agricultural bioeconomy. The Ag Bioeconomy Coalition was founded earlier this year to advance federal policy initiatives that foster growth toward an economy based on innovative bio-based products derived from agricultural commodities, including ethanol and other renewable fuels.

“With smart policy and targeted investment, the U.S. agriculture and bio-manufacturing sectors can provide practical solutions to today’s most pressing challenges, including energy market volatility, climate change, food insecurity, and underdevelopment in rural areas,” said RFA President and CEO Geoff Cooper. “RFA is pleased to join with other leaders in the bioeconomy to advocate for policies that seize on the enormous potential of bio-manufacturing to help solve these complex problems and improve the quality of life for all Americans.”

Encompassing a broad range of technologies, the ag bioeconomy uses renewable, biobased materials as inputs to make chemicals and products such as fuels, manufacturing materials, and consumer goods. The industries represented in this coalition provide an opportunity to tap into the full potential of the American agriculture sector, support supply chain resiliency, and help address key environmental issues.

Cooper noted that ethanol, in particular, is poised to play a leading role in the energy transition, both as a transportation fuel and as a building block for advanced bio-products and chemicals.

The domestic biobased products industry adds over $470 billion of value to the U.S. economy and between 2013 and 2017, the industry expanded more than 27 percent in terms of value added. For every biobased job created, 1.79 additional jobs are generated in other sectors of the economy. Between 2013 and 2017, 1.65 million jobs directly supported the biobased product industry, resulting in 2.96 million spillover jobs created in related industries to support the purchase of goods and services from the biobased products industry.

Additionally, according to the U.S. Department of Agriculture, biobased products displace approximately 9.4 million barrels of oil annually and have the potential to reduce greenhouse gas emissions by an estimated 12.7 million metric tons of CO2 equivalents per year. These GHG benefits will grow in the future, as the carbon footprint of ethanol and other bioproducts continues to shrink. In 2021, RFA’s producer members unanimously pledged to reach net-zero carbon emissions by 2050 or sooner.