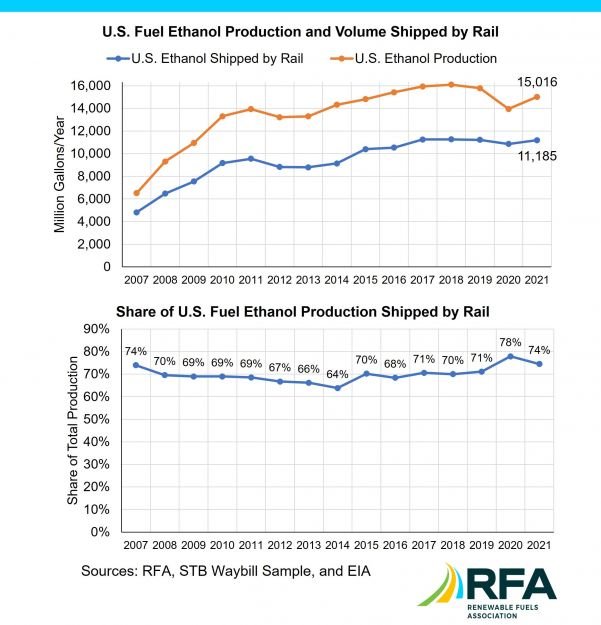 The Renewable Fuels Association and nearly 200 other organizations representing a broad swath of the agricultural value chain have urged Congress to act quickly to prevent a rail strike and service shutdown on November 19, the deadline for unions and railroads to finalize an agreement. RFA continues to engage in discussions with the Biden administration and congressional leadership in search of a speedy resolution to the ongoing rail labor dispute.

“A strike or lockout combined with existing challenges in the rail system, at our ports, with trucking and with record low water levels on the Mississippi River impacting numerous barge shipments would be catastrophic for the agricultural and broader U.S. economies,” wrote the Agricultural Transportation Working Group and many of its allies, in a letter to congressional leadership. “Congress must act to prevent this from occurring if the parties cannot reach agreement.” The group pointed out that critical inputs and agricultural products such as ammonia shipments could be embargoed as early as November 14, the day Congress returns to session.

“The U.S. ethanol industry is highly reliant on the rail system to get our products to market,” said RFA President and CEO Geoff Cooper. “More than 400,000 workers whose jobs are supported by the ethanol industry are depending on Congress, the Biden administration, the railroads, and the unions to work this out as quickly as possible. If the nation’s trains stop running, the nation’s ethanol biorefineries stop running too.”

The majority of the ethanol produced in the United States—more than 70 percent—is transported via railway across the lower 48 states as well as into Canada and Mexico. In fact, over the last five years, U.S. railroads have transported an average of nearly 395,000 carloads of ethanol per year.

Even before the current labor dispute emerged, ethanol producers were experiencing a significant deterioration in rail service. In comments submitted to the Surface Transportation Board in May, RFA noted that average terminal dwell times were 32 percent above pre-pandemic levels, and the average ethanol unit train dwell time was up 64 percent. The average train speed for ethanol unit trains had decreased 14 percent since the start of 2020, and the rail industry shed 41,000 jobs between November 2018 and January 2022—more than one-fifth of industry employment.