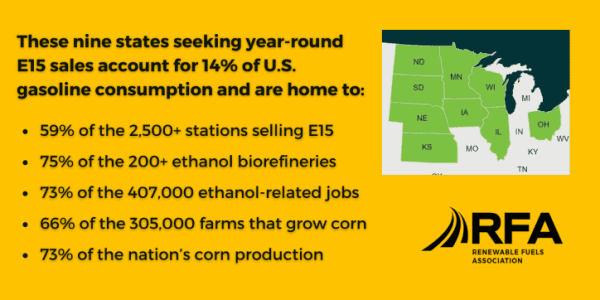 The Renewable Fuels Association today thanked Ohio Gov. Mike DeWine for notifying the U.S. Environmental Protection Agency that he is taking action to allow the year-round sale of lower-carbon, lower-cost E15 in his state beginning in 2023. Ohio joins eight other Midwestern states that took similar action in April.

DeWine is exercising the authority granted to state governors under the Clean Air Act, and his action will result in equality in the regulation of E15 and E10 volatility during the summer months. This would allow retailers and marketers in Ohio to sell E15 unincumbered year-round in 2023 and beyond, and his action follows a similar move in late April by a bipartisan group of eight governors from Iowa, Illinois, Kansas, Minnesota, Nebraska, North Dakota, South Dakota and Wisconsin.

“We thank Gov. DeWine for joining many of his Midwest peers in securing a permanent solution for opening the market to E15 and keeping fuel prices lower for the state’s consumers,” said RFA President and CEO Geoff Cooper. “Gov. DeWine should be applauded for pursuing a simple regulatory solution that will allow consumers in Ohio to benefit from E15’s lower cost and lower emissions throughout the year. We continue to call on other states and the EPA to take similar action, so that the benefits of E15 can be permanently enjoyed by drivers across the nation.”

Taken together, the nine states now seeking permanent year-round E15 sales consume nearly 20 billion gallons of gasoline annually, representing 14 percent of the nation’s gasoline consumption. They also are home to 59 percent of U.S. retail stations selling E15 and three-quarters of the country’s ethanol biorefineries. The ethanol industry in these nine states supports over 250,000 jobs, and more than 200,000 farms in those states grow corn.

The E15 blend currently provides drivers savings of up to 40 cents a gallon or more, compared to regular unleaded E10 gasoline. Cooper also highlighted recent research from refining sector experts that showed the action sought by the governors would impact gasoline production costs by just 1.5 cents per gallon or less in the Midwest.