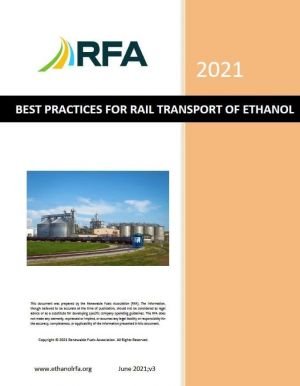 At the request of the National Transportation Safety Board, the Renewable Fuels Association today published an update to its Best Practices for Rail Transport of Ethanol manual. For years, the publication has served as an important and trusted educational tool promoting regulatory compliance and best practices for the continued safe transport of ethanol via rail.

“More than two-thirds of ethanol travels to the marketplace by rail, and rail transport plays a significant role in the everyday operations of most ethanol production facilities,” said Kelly Davis, RFA Vice President of Regulatory Affairs. “Rail transport of ethanol has established an impeccable safety record over the years, thanks in large part to the best practices the industry has developed and put into place. We are pleased to continue offering our members—and the industry at large—the information and tools they need to stay safe.”

Davis noted that an ethanol plant situated on a rail line can easily expect to receive and ship an average of three dozen railcars per day. This includes the reception of raw materials and process inputs, as well as the shipment of output products—fuel ethanol and co-products like distillers grains—to customers. Rail transport often represents the third-highest expense for a typical ethanol facility, following only expenditures on feedstock and direct energy costs.

Among the important updated practices stressed by RFA and NTSB is to place the older DOT-111 tank cars toward the back in high-hazard flammable trains, to minimize the risk of derailment and tank car breach, and the newer DOT-117s in front of them. RFA and its members encourage the continuing rapid pace of the replacement of the DOT-111 fleet with DOT-117 cars to eliminate the need to sort and arrange cars.