The carbon footprint of corn ethanol shrunk by 23% between 2005 and 2019 as farmers and ethanol producers adopted new technologies and improved efficiency, according to a new analysis published in the academic journal Biofuels Bioproducts and Biorefining by scientists at the Department of Energy’s Argonne National Laboratory. By 2019, the researchers found, corn ethanol was reducing lifecycle greenhouse gas emissions by 44-52% compared to gasoline.

The researchers also determined that corn ethanol alone reduced transportation-related GHG emissions by nearly 550 million metric tons between 2005 and 2019. These findings are consistent with other research published earlier this year, which found corn ethanol offers an average GHG savings of 46% and the use of all biofuels (i.e., ethanol, renewable diesel, biodiesel, biogas, etc.) between 2008 and 2020 reduced GHG emissions by 980 million metric tons.

“Our study shows that while the corn ethanol industry has experienced significant volume expansion, it has reduced the GHG intensity of corn ethanol through improved US corn farming and ethanol biorefinery operations. Corn yield has increased, and chemical and energy use intensities of corn farming have decreased. In ethanol biorefineries, ethanol yield has increased, and energy use has decreased significantly,” according to the researchers. “Biofuels, including corn ethanol, can play a critical role in the U.S. desire for deep decarbonization of its economy.”

Commenting on the new research, RFA President and CEO Geoff Cooper said, “This new study from the experts at Argonne National Laboratory adds to a growing body of scientific evidence that proves today’s corn ethanol is playing a major role in decarbonizing our nation’s transportation fuels and combatting climate change. The researchers found that modern corn ethanol cuts GHG emissions by half compared to gasoline and underscored that the contribution of land-use change to total emissions is estimated to be relatively small, based on real-world experience and empirical data, compared to the levels that had been theorized toward the beginning of the timeframe examined. Continuous improvements in farming and biofuel production technology have helped establish ethanol as a true low-carbon fuel that is available here and now to clean up our nation’s liquid fuels. And, as acknowledged by these researchers, those improvements will continue; with the adoption of new and emerging technologies, we expect corn ethanol can be a net carbon-neutral or carbon-negative fuel by the end of this decade.

“We encourage the White House and Environmental Protection Agency to consider the findings of this study as they examine policy and regulatory opportunities for reducing carbon pollution. We also urge EPA to incorporate the Argonne results and other recent research as the agency considers updating its 12-year old GHG analysis of ethanol and other renewable fuels.”

The Argonne researchers attribute the improvement in corn ethanol’s GHG performance to efficiency gains in every phase of the fuel’s production lifecycle between 2005 and 2019, including:

“The reduction in the 58 gCO2e/MJ CI of corn ethanol in 2005 to 45 g/MJ in 2019 (plus the LUC value of 7.4 g/MJ) provides significant GHG emission reductions compared to the CI of 93 gCO2e/MJ for the US average petroleum gasoline blendstock,” the study concludes. 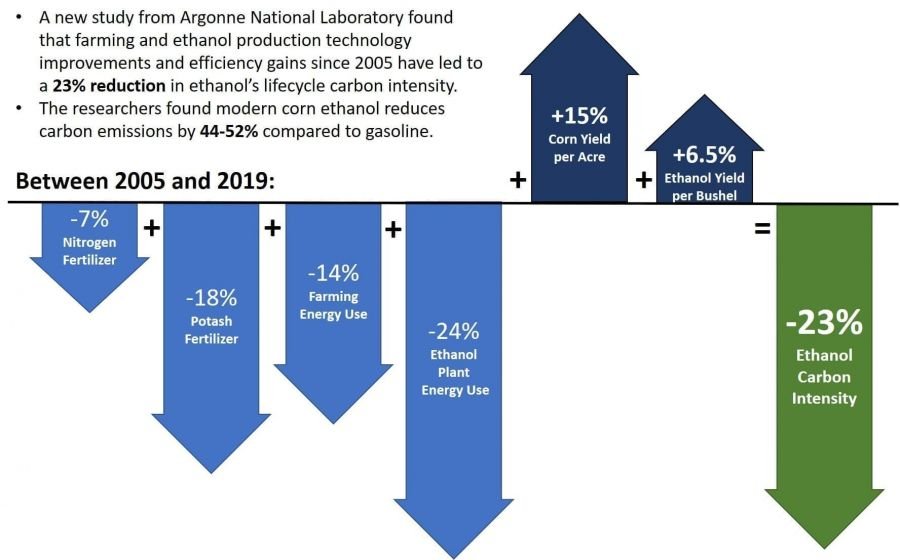