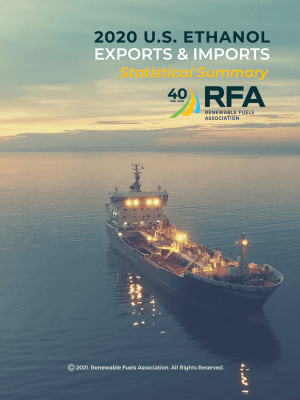 “Exports continued to be a major demand driver for the U.S. ethanol industry in 2020, even as producers coped with the impacts of a global pandemic and ongoing trade wars,” said RFA President and CEO Geoff Cooper. “As these reports show, the value of our industry’s exports approached $5 billion in 2020, making a significant contribution our nation’s balance of trade and underscoring the growing worldwide need for low-carbon, high-octane fuel and high-protein animal feed. U.S. ethanol producers should be proud of the positive impact they had on the lives of millions of consumers around the globe in 2020.”

The export/import trade summary report on ethanol provides annual and monthly data on U.S. ethanol exports, highlighting the fact that more than 1.334 billion gallons—10 percent of the ethanol produced in the United States—were exported in 2020. While this is 9 percent lower than 2019, it remains the fourth largest export volume in history. This ethanol, valued at $2.33 billion, was shipped to 90 countries on six continents. Canada was the top export destination, taking in nearly a quarter of U.S. ethanol exports, followed by Brazil and India. 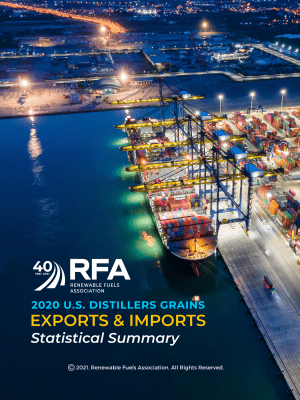 The United States brought in less than 200 million gallons of ethanol imports, meaning the industry remained a net exporter by a large margin in 2020. Maps depicting the leading ports of entry and departure for U.S. ethanol imports and exports are offered in the reports, as are figures showing the annual economic value of U.S. ethanol exports.