In addition to the custom RFA ethanol bike designed by Paul Jr. Designs, featured on an episode of “American Chopper,” attendees will get the chance to see the RFA flex-fuel Jeep Wrangler, designed and built by Kenny Hauk and featured on the Amazon Prime series Hauk Machines. The Jeep sports over 1,100 hp when running on E85 (85% ethanol). 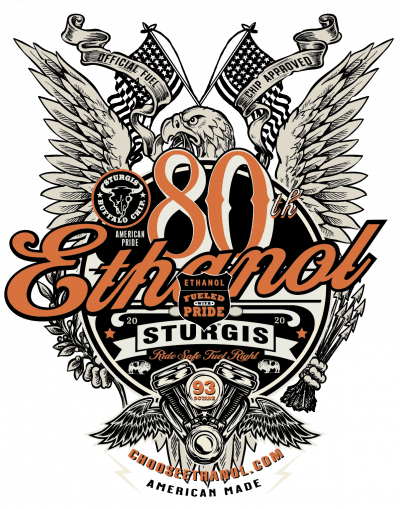 “My Fat Boy and all the Chip’s vehicles purr like a kitten all year on the 93 octane E10 dispensed at the Chip’s fuel station,” said Buffalo Chip owner Rod Woodruff. “The Buffalo Chip appreciates all the RFA does here for us and our visitors. When riders realize ethanol can provide over 1,100 hp to four wheels, it will no doubt cause a bit of ‘power envy’ as this powerhouse E85-fueled custom Jeep is stationed near the pumps during RFA’s Free Fuel Happy Hours.”

As part of its work at Sturgis, RFA will also sponsor the 13th annual Legends Ride on Aug. 10, with RFA Vice President of Industry Relations Robert White participating and actor Tom Berenger as the ride captain. The RFA Jeep will also be on display in downtown Deadwood.

As a special benefit for bikers, RFA will again host Free Fuel Happy Hours at the rally, providing a free tank of 93 octane E10 (10% ethanol) for motorcycles, a ceremonial t-shirt and ethanol-based hand sanitizer. The free tank giveaway will be held from 10 a.m. to 1 p.m. Tuesday through Thursday, Aug. 11-13, at the CrossRoads area of the Buffalo Chip Campground. The fuel station that will feature the Free Fuel Happy Hours was donated by the RFA in 2017. RFA will also have a presence throughout the campground with banners, videos on the jumbotrons, and addressing the concert crowd each night.

This will be the 12th rally for RFA’s White, who will be on hand during the Free Fuel Happy Hours to answer any questions as motorcycle riders fill up on the high-octane fuel. Additionally, several RFA members will be in attendance to help educate riders about the numerous benefits of ethanol.

RFA became involved in the Sturgis rally more than a decade ago because it offers the opportunity to promote the benefits of high-octane, low-cost ethanol to the motorcycling community in a fun and exciting way.

“We know things will look a little different at Sturgis this year, thanks to COVID, but one thing that remains the same is the fact that ethanol is a great fuel choice,” said RFA Vice President of Industry Relations Robert White. “Our work at world-class events like this at Sturgis help us demonstrate the real power high-octane, low-carbon ethanol offers.”