“We applaud this bipartisan group of Senators for exposing the absurdity of the oil industry’s latest ploy to undermine the Renewable Fuel Standard,” said RFA President and CEO Geoff Cooper. “We thank them for holding Administrator Wheeler accountable and demanding answers. EPA’s failure to comply with the recent Tenth Circuit Court decision is prolonging uncertainty and exacerbating economic harm in rural America, which was already reeling from the effects of COVID-19 on the agriculture and biofuels sector. RFA agrees with these Senate leaders that granting gap-year small refinery exemptions would not only be illegal, but it would also worsen the demand destruction that renewable fuel producers have already endured at the hands of EPA in recent years. We proudly join these Senators in calling on EPA to immediately deny the gap-year petitions and apply the Tenth Circuit decision nationally.” 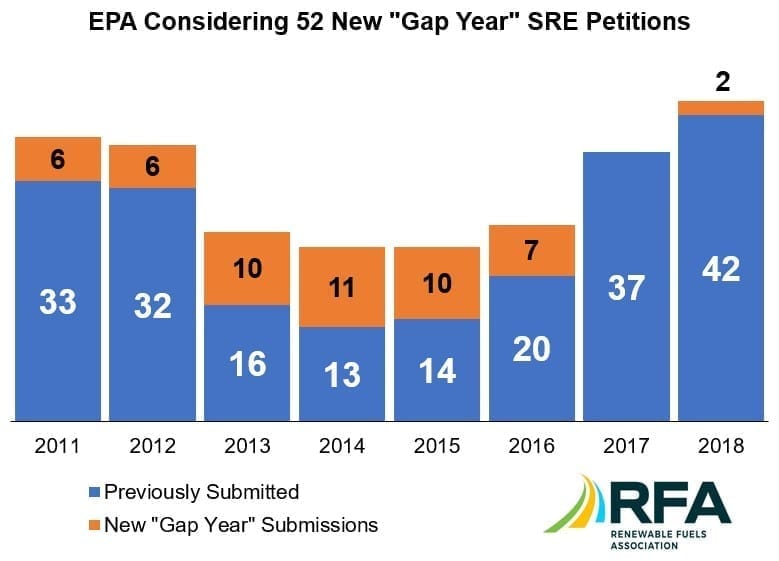 The gap-year issue arose after a January decision by the Tenth Circuit Court of Appeals, in Renewable Fuels Association et al. vs. EPA, rejecting a set of waivers granted that were not direct extensions of ones previously granted, as required by law. The case was brought against EPA by RFA, the National Corn Growers Association, National Farmers Union and American Coalition for Ethanol. In an attempt to circumvent the court decision, numerous refineries have now applied for retroactive waivers for years in which they did not originally ask for, or receive, a waiver. On June 18, EPA disclosed that 52 new petitions had been received, covering the compliance years 2011 through 2018. In late May, RFA was the first to urge Wheeler to deny any gap-year waivers that came forward.

“Even before COVID-19, the misuse of small refinery waivers under the RFS had led many biofuel plants to shut down partially or altogether,” the Senators write. “The further loss of biofuel demand and sales during COVID-19 has resulted in further harm to the industry, with over 100 biofuel processing plants now idled or closed. … The approval of SREs for past compliance years at this moment would only worsen the unprecedented economic challenges facing the biofuels industry and the rural communities that it supports.”

The Senators also posed specific questions to the EPA, related to granting of waivers to large companies like Chevron and Exxon, the nationwide application of the recent Tenth Circuit decision rejecting waivers that are not extensions of prior ones, and general waiver requests from the Renewable Fuel Standard due to the COVID-19 pandemic. Click here for the Senators’ letter.