By Geoff Cooper, President and CEO

As clean energy supporters across the globe celebrate World Biofuels Day, today seemed like the perfect occasion to reflect on two recent RFA journeys to Asia focused on extending the global reach of the U.S. biofuels industry and educating other markets about the value of our lower-cost, lower-carbon ethanol. In July, Kelly Davis, vice president of technical and regulatory affairs, traveled to the Philippines, while I went to Japan.

The main purpose of our trade missions was to educate Japanese and Philippine energy industry leaders, policymakers, regulators and media about the environmental and economic benefits of ethanol. While in Japan, I was able to share lessons learned from the U.S. experience with ethanol. We were pleased to join our partners from the U.S. Grains Council, U.S. Department of Agriculture, and other organizations on these two trips. 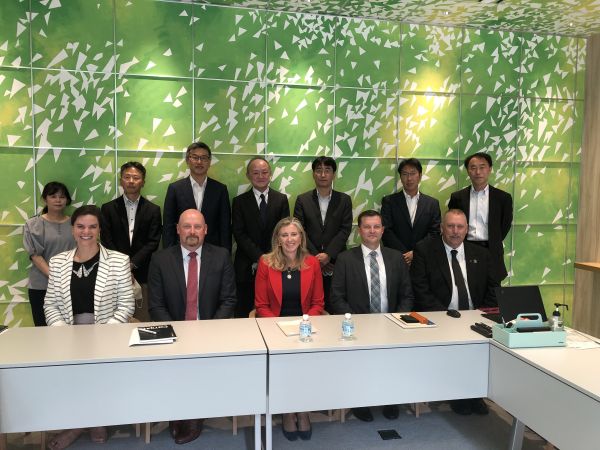 Japan has pledged to achieve economy-wide carbon neutrality (net-zero emissions) by 2050 and achieve a 46% reduction by 2030. While there, I had the opportunity to explain how ethanol can help Japan meet these goals. Japan’s current renewable fuels policy set a target for biofuel usage of 500 million liters (oil equivalent) annually from 2018-2022. The government will soon be reviewing and potentially adjusting this policy for future years, offering an excellent opportunity for the country to embrace greater use of low-carbon renewable fuels.

To date, Japan’s oil refiners have met the renewable fuel requirements by blending ethyl tertiary butyl ether (ETBE) that is derived from ethanol. Refiners do not currently blend ethanol directly into gasoline, though regulations currently allow for the use of 3 percent ethanol.

Moving to direct blending of ethanol, rather than ETBE, in Japan would reduce fuel costs and significantly lower GHG emissions. We answered questions about direct ethanol blending (such as infrastructure and vehicle compatibility, as well as market economics) and shared what has been learned here in the United States with the move from E0 to E10, and now to E15. Like the United States, Japan is very focused on developing sustainable aviation fuel (SAF) and we had numerous conversations about the benefits of using ethanol as the feedstock for SAF.

And let’s not forget about co-products! Japan is already one of our top customers for distillers grains exports, bringing in more than 425,000 metric tons last year to feed poultry, hogs, and other livestock.

In the Philippines, Kelly joined a group of U.S.-based agribusinesses, farm organizations, and representatives from state departments of agriculture on a trade mission for agricultural opportunities to discuss ethanol use and the possible increase to E15 blends in that country. The Philippines is the eighth-largest export market for U.S. agricultural products, at over $3 billion, and has historically been a significant market for U.S. ethanol exports.

The visiting team met with SEAOIL, the first oil company to promote and sell E10 and first to develop E85 fuels in the Philippines, and Kelly also got to visit Jetti Petroleum, with site visits to retail stations, and discussed current market conditions and the possibility of E15 in the future.

To top off her visit to the Philippines, Kelly was proud to take part in the signing of a Memorandum of Understanding establishing a cooperative partnership of knowledge exchange, technical information, and best practices as they relate to the biofuels industry and policy development. The MOU would also further position the country’s National Bioenergy Research and Innovation Center—and the Philippines biofuel industry—as hubs for technical and policy thought leadership in Asia.

As mentioned earlier, it’s not just about ethanol; even our coproducts have a global reach. This October’s Export Exchange, a joint effort amongst RFA, the U.S. Grains Council, and Growth Energy, will provide overseas attendees the opportunity to build relationships with U.S. suppliers of distillers grains and other commodities, an event that traditionally results in hundreds of millions of dollars in grain sales.

On this World Biofuels Day, we are truly proud of the global leadership role our nation plays in producing, using, and advancing renewable fuels like ethanol. RFA celebrates and will continue to spread the positive attributes of ethanol and coproducts around the globe, and we are optimistic about a bright global future for renewable fuels.