A little over ten years ago, E15 was approved by the U.S. Environmental Protection Agency for 2001 and newer vehicles, along with all flex-fuel vehicles. A chief reason for this success was the Renewable Fuels Association’s hard work on the only approved Misfueling Mitigation Plan that would allow retailers to begin offering this new fuel. Approved as gasoline, E15 needed to have an octane posting and the orange-and-black warning label alerting consumers of what engines are approved for the new fuel. RFA also worked with EPA on various hose configurations to minimize any chance of confusion at the pump or, ultimately, any misfueling.

In this month a decade ago—July 10, 2012, to be precise—E15 finally was on the pour at a retail station, in the college town of Lawrence, Kan., where RFA worked with a local fuel retailer to make it happen. The retailer already had E15-compatible equipment and simply required some label changes and an adjustment to the blending settings. At this point, no terminal offered E15, so the only option was to create E15 at retail by diluting E85 with E10. In just under an hour, the station was ready. The station owner made the adjustments, and I personally updated the labels on the fuel dispensers. 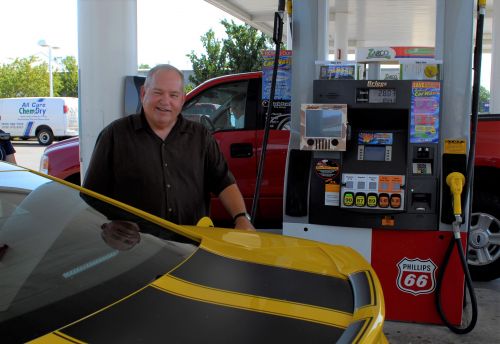 Jere White, my father, was the Executive Director of Kansas Corn at that time and was the first person in the country to fill his car—a yellow 2010 Chevy Camaro—with E15. Like many other state corn organizations, Kansas Corn had provided this station with funding to install E85 a couple of years before, which allowed the extremely easy and inexpensive debut. This first tank of E15 was the culmination of years of work, and it was great to share that experience with Dad.

Despite all the warnings from anti-ethanol groups and even attack letters from the American Automobile Association (AAA), E15 rolled out without any issue. In fact, now with 10 years in the history books, not one substantiated claim of engine damage—nor any warranty claim denials—have been seen. This shouldn’t be a surprise, though; EPA tested this fuel for over 6 million miles. Since that time, consumers have logged more than 55 billion miles on E15. More recently, the California Air Resources Board tested E15 and saw consistent results. E15 works, and it works well. It saves you money and even lowers emissions from your vehicle. E15 also helps with growing concerns about energy security. It’s not only a domestic product, but also renewable.

Drivers seem to agree with all this, and consumer demand has helped grow E15 well beyond this one station to more than 2,600 stations now operating in over 30 states. There are more E15 pumps opening daily, and E15 is helping people reduce their fuel bill where available.

The week leading up to this past Fourth of July holiday saw E15 again hit the spotlight with a massive promotion by the fuel retailer Sheetz, which operates across several eastern states, and high overall fuel prices have led others to take similar action. Even the folks over at usually suspicious Fox News have been happy to talk about E15.

Your local station might offer E15, which is sold under a few different marketing names. Now available in six different octane levels, you might see Unleaded 88, Clean 88, Regular E15, UNL88, eBlend, and more. These marketing names are just like what the petroleum companies use to differentiate their products from their competitors. No matter what E15 is called, it has to carry the orange-and-black label so there is no confusion. If your station of choice doesn’t offer E15, ask them to do so. It will save you money and help clear the air, all while supporting energy security and the rural economy—as it’s been doing for ten years, now.