Blog Posts
E15 Sales Surge to New Record in 2021, but Are at Risk Going Forward Due to Regulatory Uncertainty

Recently released data for Minnesota and Iowa show that sales of E15, a blend of 15% ethanol and 85% gasoline, surged to record levels in 2021. Based on an analysis of the data by the Renewable Fuels Association, it is estimated that national E15 volumes hit a record 814 million gallons (mg) in 2021, an increase of 62% from 2020 (Exhibit 1). (National statistics on E15 sales volumes are not published, but Minnesota and Iowa account for nearly one-third of U.S. stations.)

E15 sales by stations that reported volumes were nearly 87 mg in both Iowa and Minnesota in 2021, an increase of 16% in Minnesota and 43% in Iowa from 2020 levels. However, based on supplemental information from the Minnesota Dept. of Commerce and the Iowa Dept. of Revenue, it can be estimated that total E15 volumes were 131 mg (+40%) in Minnesota and 97 mg in Iowa (+45%), including stations that sold E15 but did not report their volumes. Note that the U.S. estimate is based on average sales per reporting station multiplied by the RFA’s count of the number of stations selling E15 nationwide.

The sharp increase in E15 sales in 2021 is likely due to three factors: 1) an increase in the number of stations that offer the blend, 2) the recovery in overall fuel consumption toward pre-pandemic levels starting in the late spring, and 3) a rebound in the prices of renewable identification numbers (RINs), which are credits used to demonstrate compliance with the federal Renewable Fuel Standard. Higher RIN prices incentivize retailers to offer blends with higher ethanol content and facilitate more competitive pricing of such blends to drive increased sales.

The ground was prepared for such an expansion in 2019, after the Environmental Protection Agency issued a regulation that allowed E15 to be sold year-round (Exhibit 2). Previously, many fuel retailers had found it difficult or impossible to offer E15 during the summer months in conventional gasoline markets, due to outdated fuel volatility regulations.[1] In 2020, nationwide E15 sales managed to increase despite the 13% drop in overall gasoline consumption due to the COVID-19 pandemic, but the gains were muted. 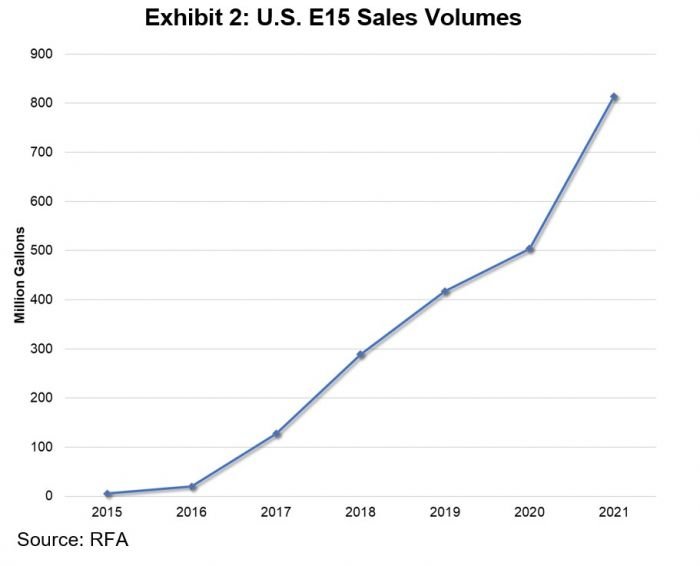 However, the progress that was witnessed in 2021 is now threatened. In July 2021, the D.C. Circuit Court of Appeals ruled in favor of oil refiners who argued that EPA’s year-round E15 regulation should be vacated because the Agency had exceeded its authority. Despite the court decision being published in early July, it did not affect E15 sales in 2021 since retailers were allowed to continue selling the fuel throughout the summer without making any changes to their operations. However, if the court decision is allowed to stand and no other action is taken, summertime E15 sales would be expected to drop in conventional gasoline areas in 2022, as was the pattern prior to 2019.

While this is a long-term threat to the expanded availability of E15, the U.S. faces a more acute fuel supply and price problem this year. The Russian invasion of Ukraine has driven up global and U.S. crude oil prices, and retail gasoline prices have hit record levels as a result. In 2021, the U.S. imported an average of 670,000 barrels/day of crude oil and petroleum products from Russia, which the Biden Administration has now banned. Expanded use of ethanol in E15 could go a long way toward replacing the gasoline from Russian imports, but if restrictions on E15 return this summer as scheduled, sales could go into reverse, further tightening fuel supplies and putting upward pressure on gasoline prices. The ability to ramp up E15 volumes has been demonstrated, and the Biden administration should take immediate action to allow E15 to continue to be sold in conventional gasoline areas this summer, just as has been the case the last three years.

[1] EPA limits the volatility of gasoline during the “high ozone season” every summer (Jun. 1-Sep. 15). Prior to EPA’s 2019 rule change, the practical volatility limit for E10 sold in conventional gasoline areas was 10 pounds per square inch (psi) Reid vapor pressure (RVP), but E15 was held to a 9-psi limit. EPA’s 2019 rule effectively extended the volatility limit for E15 to 10 psi, creating regulatory parity for E15 and E10.