Gasoline prices are high—up 50% in 2021 and rising further this year, with California prices reaching record levels—but what’s worse is that they might go even higher, given the distinct possibility of a Russian invasion of Ukraine and oil hitting $100 a barrel or more.

Given the strong tie between oil and gasoline prices, the impact of surging oil prices is evident. What is harder for drivers to see when they fill their tanks, however, is that ethanol helps hold down the price of gasoline, in two ways.

First, ethanol is usually less expensive than petroleum-based gasoline, and associated credits toward the federal Renewable Fuel Standard (known as renewable identification numbers, or RINs) also help offset the cost of gasoline. An example of these cost savings can be seen in wholesale prices of fuel sold at the Omaha rack, as reported by the Nebraska Energy Office. The data set is unique in that it includes a monthly price history for sub-octane gasoline blendstock (84 AKI) as well as regular-grade ethanol-free (E0) gasoline (87-AKI). To reach the minimum octane rating required for sale at retail (87 AKI), the 84-AKI blendstock must be blended with 10% ethanol; however, the 87-AKI E0 can be sold without such blending.

In January, sub-octane gasoline blendstock was $0.08/gallon cheaper than 87-AKI E0 gasoline on average at the Omaha rack, which is typical since increasing octane at the refinery using hydrocarbon sources is costly and energy intensive. Moreover, ethanol was priced $0.25/gal below 84-AKI blendstock and $0.33/gal under 87-AKI gasoline. The cost of producing E10 by combining 90% blendstock with 10% ethanol averaged $2.33/gal after accounting for RIN value—$0.22/gal less than the price of 87-AKI ethanol-free gasoline (Figure 1). 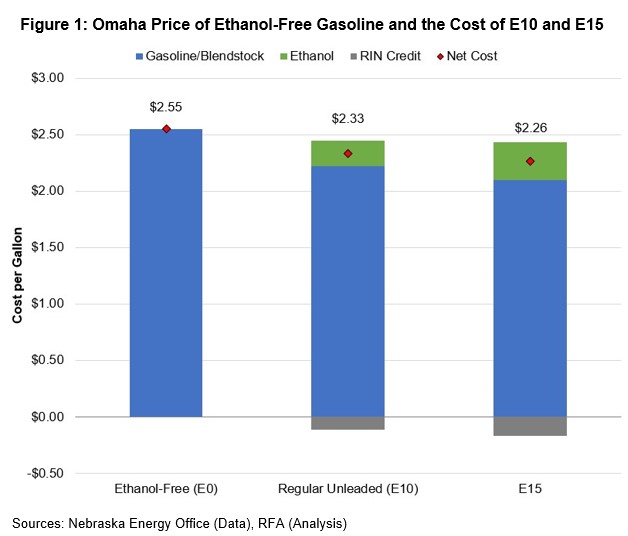 E15 provided even larger savings, given the proportionally higher level of ethanol used and RINs made available. E15 could have been produced for $2.26/gal—$0.29/gal less than 87-AKI ethanol-free gasoline.

Although data are not available for February, OPIS reported that the ethanol price was $2.09/gal for the most recent week, a decline of $0.13/gal from the January average. On the other hand, it can be estimated that prices rose $0.26/gal for 84-AKI blendstock and $0.29/gal for 87-AKI E0 gasoline, based on historical relationships to gasoline futures, which have been strong. As a result, E10 could have been produced for $0.28/gal less than the estimated price of E0, with E15 at a $0.37/gal discount.

A second way that ethanol helps lower gasoline prices is by reducing the consumption of petroleum-based gasoline, which translates to lower demand for crude oil. For the 12 months through November 2021, ethanol represented 10.4% of the finished motor gasoline pool, according to data from the U.S. Energy Information Administration (EIA).

In a 2019 study, energy economist Dr. Philip K. Verleger, Jr. used an econometric model to estimate the impacts of the RFS on crude oil and gasoline prices.  He determined that by expanding fuel supplies, the RFS reduced the price of crude oil by $6/barrel on average from 2015 to 2018. In turn, gasoline prices were reduced by an average of $0.22/gal, the equivalent of $250 annually for a typical household.

The study also showed that ethanol significantly helps dampen gasoline price shocks that result from sudden oil market disruptions, which is timely given that the recent tensions between Russia and Ukraine have driven crude oil prices well above $90/barrel, the highest level in eight years. The study reviewed oil market disruptions over nearly 50 years and provided an example in which the availability of ethanol would avoid a significant impact to U.S. gasoline prices from a supply disruption. Dr. Verleger concluded, “Renewable fuels, then, provide a very large measure of protection against the economic impact of future disruptions.”

These findings are important for understanding today’s high-price environment, since crude oil continues to be the predominant driver of retail gasoline prices (Figure 2). Over the last decade, crude oil and gasoline prices have had a correlation of 0.96 (a coefficient of 1.00 indicates perfect positive correlation). 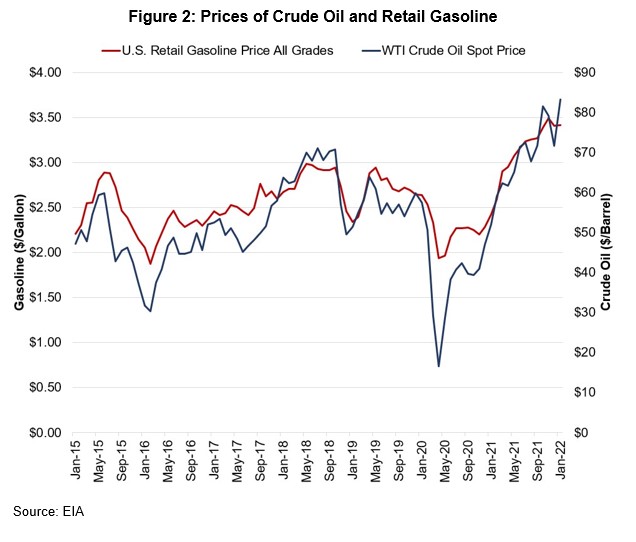 As a competitively priced fuel that reduces demand for crude oil and gasoline, ethanol is helping to significantly mitigate today’s high gasoline prices. Moreover, ethanol has broader societal benefits: cutting greenhouse gas emissions by roughly half compared to gasoline, improving air quality and strengthening the economy of Rural America. These are worth keeping in mind, both in the near term and as the Energy Transition proceeds.