What began as one high school junior’s passion project has gone on to win science fair accolades and capture our attention here at RFA for its demonstration of ethanol’s versatility in engines of all sizes.

John Horangic, a junior at Bishop Brady High School in Concord, N.H., spent last year’s summer vacation converting his family’s broken lawn mower to run on E100, 100% ethanol. The trick was in the carburetor, as Horangic explained: By repairing and adjusting a broken carburetor, he could convert a fossil fuel-dependent piece of lawn equipment to operate on a more environmentally friendly fuel and limit the air pollution typically emitted by mowers.

At the start of summer in 2019, he began taking measurements on the carburetor to gather the data needed to design a formula to convert the mower’s engine. By late summer, he was ready to try out the formulas and began making modifications. In October 2019, he used denatured ethanol, essentially E100, that he purchased from a local hardware store in one-gallon bottles. 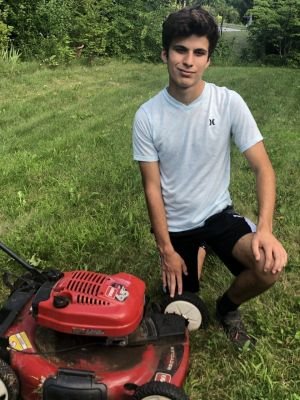 After the project was completed, Horangic entered it into his school’s science fair and received two awards, including Second Place in the Engineering competition and the Yale Science & Engineering Award. Horangic has plans to continue this project and hopes to enter next year’s science fair with an emissions study of the converted lawn mower. Because the emissions sensing equipment needed to complete this study is hard to come by, he plans to approach three universities across his state in hopes of their assistance in acquiring the necessary equipment.

Horangic found himself pursuing this project after demonstrating a passion for mechanical engineering that began in his middle school’s Robotics Club. This, coupled with a more recent interest in environmental sustainability, led him to want to pursue a career in ethanol.

“When I was looking to repair the broken lawn mower, I thought it would be great if I could make this piece of equipment run on an alternative fuel that is more environmentally-friendly,” said Horangic. “The idea that we’re eventually going to run out of fossil fuels, as well as the current climate crisis, inspired me to choose ethanol for this project. I found working on the lawn mower and the fuel to be really fun and look forward to continuing this project or starting new ones with a similar mission.”

Horangic’s Science Fair report gives an overview on the steps that he took to convert his lawn mower to run on E100 and may serve as a useful tool for others who want to convert their small engine equipment to run on higher ethanol blends or even 100% ethanol. Horangic is a bit of a purist in this regard and only wants to investigate uses for 100% ethanol fuel. Horangic hopes to attend college in California and pursue a degree in mechanical engineering with a concentration in environmental studies. After his demonstrating such ambition at a young age, we’re excited to see where Horangic and other future leaders in our industry will take us.