As the only operating ethanol facility in the state of New York, Western New York Energy (WNYE) holds a significant value for New York’s corn growers. Neighboring farmers rely on WNYE as a stable market for selling their product as they have grappled with demand uncertainty while much of the ethanol industry’s production capabilities have been scaled back or idled due to the loss of demand caused by the COVID-19 crisis.

Fortunately for these New York farmers, WNYE CEO Tim Winters has sent a strong message of support and economic stability by doing all he can to maintain operations at a consistent level.  With his commitment to local farmers in mind, Winters quickly altered operations to produce ethyl alcohol for hand sanitizer when the opportunity to meet the new surge in demand for hand sanitizer emerged and the FDA lifted regulations. 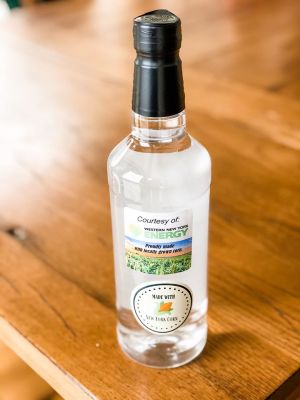 “I sent a letter to the corn growers across the state to qualm fears of idling and continue building better relationships,” said Winters. “The state of New York in particular has been hit very hard by the COVID-19 pandemic. With so much uncertainty for so many, I felt like this was an area that we could contribute to keep our facility operational but also assist with the shortage of hand sanitizer.”

After having partnered with nearby distilleries to produce hand sanitizer, WNYE has continued to look for ways to serve their partners in the corn farming industry. Like many industries, it’s important for farmers and their employees to stay healthy as many farms operate with a lean staff, and less employees means less production.

So, Winters took a solutions-driven, proactive approach and found himself as a purchaser of the product he was supplying ethanol for: hand sanitizer. He reached out to the distilleries he had partnered with and purchased enough bottles of hand sanitizer to fill four-hundred bags of product at eight bottles per bag. In addition to the hand sanitizer, he made sure informational resources were also provided to farmers, including one-pagers from the National Corn Growers Association that gave farmers instructions on how to limit the spread of COVID-19.

Winters hired his nephew, who would soon complete a summer job that he’d never forget, to fill all four-hundred bags. Once the bags of hand sanitizer and informational resources were ready to go, the next action item was to establish a process to distribute the product in a way that limited contact while reaching as far and wide as possible to deliver to the rural communities in which these farmers lived and operated. Winters contacted his colleague at the New York Corn & Soybean Growers Association (NYCSGA), Executive Director Colleen Klein, whose idea allowed them to hit the ground running in bringing this critical product to the hands of farmers. 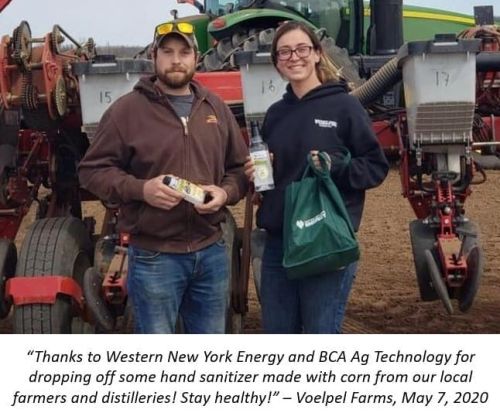 The NYCSGA advocates on behalf of farmers in New York and has connections with seed and equipment providers that work with farmers across the state. Through this network, they had the distribution channels and the network Winters needed to deliver the four-hundred bags to farmers in May 2020, as they were in the height of the 2020 planting season. As expected, the deliveries were well received by the farmers who now had a hefty supply of hand sanitizer to keep them and their families and employees safe. NYCSGA also provided “Made with NY Corn” stickers that were placed on small bottles of hand sanitizer purchased from Black Button Distilling. This label highlighted the unique cyclical relationship that this project created and a product that was made using New York corn was now in the hands of New York corn farmers.

New York is the United States’ fourth most populous state and provides the ethanol industry with a potentially valuable market now that E15 has been approved for sale year-round. State policymakers have also been looking closely at implementing a Low Carbon Fuel Standard and other policies that encourage the state to adopt an environmentally progressive transportation infrastructure. Winters says that with the proven flexibility of the local ethanol industry during the pandemic and the supportive political environment for renewable fuels, the ethanol industry has a unique advantage to grow its market in New York while helping the state meet key energy goals in pursuit of decarbonization.