At the 2020 National Ethanol Conference (NEC), all eyes were on BJ Johnson as he introduced his company’s novel engine technology. A technology so novel that it could disrupt the way heavy-duty engines fuel in the future by potentially giving them the opportunity to pursue a greener alternative to the petroleum product they’ve used for decades. 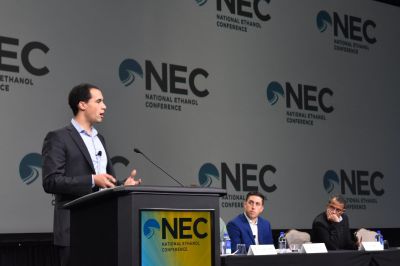 Johnson is the co-founder and CEO of ClearFlame Engine Technologies whose mission is to decrease tailpipe emissions and build a low-carbon future by modifying compression-ignition engines to allow them to swap petroleum diesel fuels for renewable fuels. Compression-ignition engines are used in heavy-duty vehicles such as semi-trucks, buses, and tractors, and produce about 23 percent of the United States’ transportation emissions (Environmental Protection Agency, 2020).

While the ClearFlame technology is fuel agnostic, Johnson chose to pursue ethanol to establish this technology in the United States because of its many benefits including efficiency, accessibility, and environmental friendliness. While these perks were certainly already understood by the audience at the NEC, the list of benefits of using ethanol in heavy-duty engines was extensive: 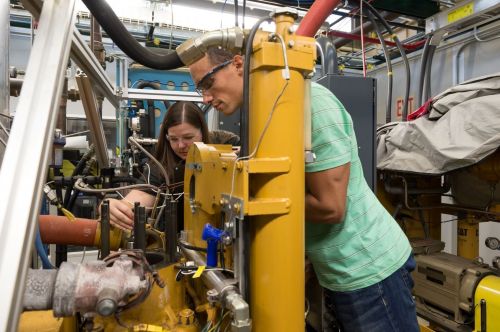 The ClearFlame technology provides a solution for many problems, including providing a new and stable market for ethanol as well as a solution for heavy-duty vehicle owners who are subjected to increasingly stringent emissions standards. For this reason, Kelly Davis, the Renewable Fuels Association’s Vice President of Regulatory Affairs, was eager to invite Johnson to participate in her “New Uses” panel at the NEC. What followed was a clear indication from the U.S. ethanol industry that they’re ready to see this new technology become a production reality.

Immediately, Johnson began to hear from ethanol industry stakeholder groups, such as members of the corn growing industry, who were eager to learn more and share their support for ClearFlame’s technology. One of the unique benefits of the ClearFlame technology is that it can use E85, which is readily available across the U.S., or even E98 – a gasoline blendstock which is virtually 100% ethanol – a novel fuel for a novel technology.

Johnson’s passion for compression-ignition engines began when he was studying as an undergraduate at Stanford University and became interested in thermodynamics. This topic continued to inspire him as he pursued his education, including a bachelor’s degree and Ph.D. in mechanical engineering from Stanford and created exciting research opportunities. His dissertation focused on the performance of alternative fuels in compression-ignition engines and the idea for the ClearFlame technology was born.

In 2016, Johnson formed ClearFlame Engine Technologies together with Julie Blumreiter, who also earned a Ph.D. from Stanford University, and right after graduation continued to pursue research around the use of alternative fuels in heavy-duty engines. The team transitioned to the Argonne National Laboratory in Chicago in 2017 as part of the Chain Reaction Innovations program, where they worked with fellow startups that are developing transformative energy technologies and cleaner combustion processes.

In 2019, they hired John Howell, a full-time business development professional, who has worked diligently to continue building on the momentum that Johnson and Blumreiter created by gathering financial support for the next phases in the commercialization process. Now, ClearFlame is in the process of building out an engine development laboratory so that they can hit the ground running in performing the technology’s first pilot-scale demonstration. This project is the first of many important projects that will bring the technology to commercial-scale, allow them to advance their relationships with diesel engine manufacturers, and explore next steps to bring the technology to market.

Currently, ClearFlame has proven the technology at the laboratory scale, using a single-cylinder engine at Argonne. The experiment was a success and demonstrated significant improvements in torque, efficiency, cost, and emissions using ethanol compared to petroleum diesel fuel.  A 15-liter commercial engine donated by Cummins will be the next proof project and will go into development and testing in the next few weeks. Results of that project will be available in September 2020.  Until then, they are looking toward the future and are currently in the process of seeking support for the next demonstration projects.

ClearFlame’s next goal is to begin a demonstration project on a stationary application, such a generator, irrigation pump, or hybrid vehicle. A simpler application will enable faster calibration of the engine since it runs at more constant speeds and loads. Fast results are the objective, so they’d like to take this first step prior to converting a transient application that requires fluctuating speeds and loads.

The primary goal of this initial demonstration is to test ethanol’s performance in an application that is traditionally reliant on using diesel fuel. This will enable them to make important comparison measurements, including torque, power, emissions, efficiency, and fuel economy. This data will be critical in establishing the benefits of ethanol in a “real world” application and making those comparisons for potential manufacturing partners.

Currently, ClearFlame is looking to assemble a team of partners to complete this project and potentially, subsequent demonstration projects. This team would need to include the following roles and it’s possible that a single partner could manage more than one role:

The expected budget for the first project is approximately one million dollars and the project is expected to take about twelve months to complete. Once this initial project has been completed, they will move on to test the technology in a mobile application and with different variations that will allow them to prepare for safety and emissions regulations, as well as provide the data needed to pursue certifications. The thoroughness of the first project will allow the following phases in the commercialization process to move quickly.

When the commercialization process has been completed, the time will come for ClearFlame to take the results of the research projects and pursue long-term agreements with engine manufacturers. The goal is to license the technology so that it can be widely used and bring additional value to truck, construction, agricultural, marine, rail and other manufacturers and companies that purchase large diesel engines.

There’s also a chicken and egg scenario as E98 fuel is not available at retail in the U.S. and the question of when to pursue building a fuel infrastructure for it remains. That said, the new fuel could be easily distributed through the E85 or even gasoline infrastructure that already exists in the U.S. While this process could require some new permitting, the fact that E98 is a liquid fuel widely available at wholesale and sourced from existing relationships gives it a competitive advantage. Alternatively, the ClearFlame technology works just as well on E85, which means deployment could also leverage existing E85 infrastructure if necessary.

While developing an application for its technology, the leadership at ClearFlame has looked closely at the full picture of how they’d like to deploy their technology and impact the world. Because the engine technology is fuel agnostic, they hope to eventually deploy research projects in other countries, such as India, Brazil, and South Africa, who have other renewable fuels options, need to build an eco-friendly future, and gain independence from foreign oil imports.

Another important element of their strategy is providing a cheaper and more accessible low-carbon alternative to the Environmental Protection Agency and other regulatory agencies that make decisions around fuels, vehicles, and the environment. Since the national-level conversation around limiting vehicle emissions and petroleum dependence began, much of the focus has been on electric vehicles and establishing policies that promote the electrification of vehicles and encourage market adoption.

“At ClearFlame, we believe that there is a faster solution to decarbonizing heavy-duty jobs and improving air quality,” said Howell. “At the center of the solution are renewable, low carbon, liquid fuels like ethanol. Air quality and decarbonization, while separate, are two positive environmental impacts that increased ethanol use provides, which is why we’ve focused on using it in our commercialization of the technology. While some progress has been made, we are still many decades and trillions of dollars away from a full electric fleet in the U.S. Now more than ever, it’s important to consider solutions that we can implement immediately to achieve decarbonization and better air quality in addition to solutions that will necessarily take decades and require massive new investment.”

In May 2020, ClearFlame Engine Technologies became a member of the Renewable Fuels Association, an act demonstrative of their dedication to the ethanol industry and its long-term success. They’re eager to make their contribution in creating a new and exciting market for ethanol producers to pursue and RFA is eager to engage and collaborate with an innovative new member that contributes to a more stable and dynamic future for the ethanol industry.

Support is needed to continue the next steps in commercialization and is an area of opportunity for the ethanol industry to invest in a new technology that has the potential to broaden the market for ethanol. For those whose interest we’ve piqued, you can reach out to BJ Johnson or John Howell to learn more about the technology and how to participate through their website at www.clearflameengines.com.