After twenty-four years of operations, Al-Corn Clean Fuel (Al-Corn) produced its one-billionth gallon of ethanol on Thursday, June 4, 2020. This tremendous accomplishment marks the latest milestone in Al-Corn’s rich history and is a demonstrative achievement of the ingenuity and resilience of their team, their facility and their positive impact on the ethanol industry as a whole. 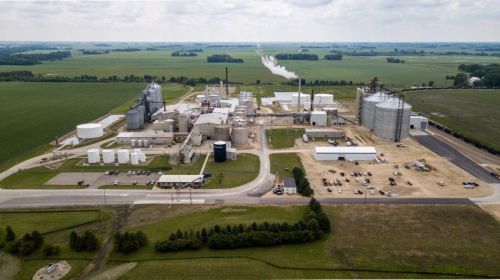 In 1994, a group of farmers in the Claremont, MN area had a discussion about the volatility of the grain market over coffee. One of the younger farmers responded with the game-changing question: “Why don’t we do something about it?” The resulting conversation focused on identifying and pursuing potential solutions to depressed corn prices. After months of research, those involved in what started as casual conversation had become the shareholders of a new corn ethanol facility. They broke ground on the property in 1995 after fundraising in their community with plans to build a 10-million-gallon facility and a stable market for local corn growers.

“The Al-Corn facility started as a co-op and the biggest goal that we had was to narrow the corn basis,” said Brad Ahrens, original chairman of Al-Corn’s board who served for fifteen years. “We also felt a lot of pressure because we had gained support from many members of our community, friends, and family and were entering uncharted territory. It took a big leap of faith but I’m glad that we did it.” 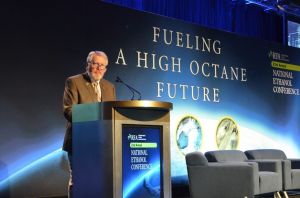 “Thirty years ago, farmers like myself often had to travel to neighboring communities and river markets to sell our corn. Given the floods that we’ve had over the past couple years, it would’ve been nearly impossible for us to deliver to those locations and we would have been hard-pressed to find a new market,” said Rod Jorgenson, current board member of Al-Corn Clean Fuel. “Now, when grinding at our maximum capacity, it is not unusual for us to see around 250 trucks a day come through the plant. Having a stable, local market to sell our grain to is invaluable.”

As construction on Al-Corn facility was underway, the time to assemble a team that would manage day-to-day operations had come. The board was looking for was someone to run the business who actually knew how to make ethanol and could finish the project, continue to hire and train staff, and get the facility up and running. The board didn’t miss a beat in bringing Randall Doyal on board as General Manager. Doyal’s expertise would see this facility through decades of operations, four expansions, and continued evolution as the ethanol industry grew to the 16-billion-gallon industry we know today.

Prior to his position at Al-Corn, Doyal had worked as an operations manager at an ethanol facility in Portales, NM, which in 1995 was owned by Giant Refining. The grain prices that year were extremely high, and a lack of hedging forced the facility to shut down in the fall. While Doyal still had a job, he also wasn’t the kind of person to be satisfied with sitting in an idle plant. As the Portales facility closed, Doyal and his family made the move to Claremont, MN, in time for him to see through multiple phases of construction and his family’s first Minnesota winter. Not long after the facility was online, plans to expand were quickly underway thanks to two key factors. The first was their ability to cheaply debottleneck two pinch points, the evaporation columns and molecular sieves. The second was the increased financial support they could access through the state of Minnesota’s producer payment program, which paid 20 cents per gallon up to 15-million-gallons of ethanol per year for a maximum of 10 years. Al-Corn’s expansion in 1997 took them from a brand new 10-million-gallon facility to an established, reputable industry player with capacity to produce 15-million-gallons per year.

Just a few years later, plans to expand were again in motion and Al-Corn was soon producing at 30-million-gallons per year. Up until that point, they had hired multiple companies and individuals to design the facility including Broin and Associates, who designed the original facility; Delta-T, who helped them to expand in 1997; and Dave VanderGriend, who helped them complete the expansion in 2001. They’ve also worked consistently with Jim Faulconbridge and his team at KFI Engineers whose collaborative approach meshed well with the team at Al-Corn and made them the perfect partner in seeing through all four expansions.

“A common question in our industry is ‘who designed your facility?’ with the expected response of Delta-T or ICM,” said Doyal. “Here at Al-Corn, we’re what you’d call a mutt.”

In order to reach their current capacity, the facility went through two more expansions. The third expansion took place in 2007 and brought the then 30-million-gallon facility to a 50-million-gallon operating capacity. As this was being completed, the U.S. economy was collapsing, and many saw the writing on the wall that the industry was over-producing. Many facilities, including Al-Corn, acted strategically and weathered the storm. However, given the industry had just experienced the “boom”, there were facilities with a lot of debt that, coupled with bad economics and a couple bad crop years, were facing really tough times. 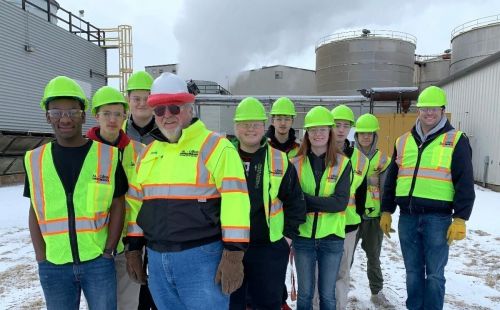 During the recession, strategy was key for the team at Al-Corn who worked to build a nest egg that could offer potentially high-reward investments. In 2009, the shareholders, along with five other ethanol facilities, purchased a 110-million-gallon ethanol facility in Janesville, MN, that later became the industry powerhouse we know today as Guardian Energy.

Many years prior to that investment, Al-Corn worked collaboratively to form the Renewable Products Marketing Group (RPMG), which began out of an agreement that initially started between Doyal and Heartland Corn Products’ former General Manager, Bill Adcock. The deal was to cost-share Adcock’s employee, Ben Brown, who would market their ethanol together. Brown was successful and this beneficial partnership gained the attention of three other ethanol plants in Minnesota. Soon, the leadership from five facilities were discussing how to market all of their ethanol together and RPMG was born.

Al-Corn’s most recent expansion was completed in 2017. It brought the facility to a 125-million-gallon production capacity, allowing them to purchase an additional 25-27 million bushels of corn per year, which brought significant value to the broader Al Corn community and their supply partners. Now, Al-Corn creates demand for 42 million bushels of corn, which they use to produce 125 million gallons of ethanol; 263,000 tons of high protein livestock feed; and 42 million pounds of corn oil– every year.

While it took multiple, significant expansions over the years to make this level of performance possible, Al-Corn has also prioritized efficiency and the environment by implementing technologies that reduce their energy and water consumption. The facility’s latest design includes a hybrid pressure distillation system, a combined heat and power system, and energy conservation efforts have reduced the plant’s energy use by more than 35% compared to the original plant design. Thanks to their efforts, Al-Corn’s water consumption has also been reduced to one-third of the original demand.

“We’ve always made it a priority to evolve with the industry in not only capacity growth, but also efficiency,” said Doyal. “The latest design we have is really cool and incorporates multiple technologies that allow us to limit our carbon footprint and produce a higher yield. This modern facility is a huge leap from what the industry looked like when I started in 1982.”

Over the years, Al-Corn has been instrumental in providing economic stability for the proud, tight-knit community of Claremont, MN. They’ve also been a great steward for the ethanol industry, whether in their work to host student groups for plant tours or in their recent production of ethyl alcohol to make hand sanitizer as a way to help their community battle the effects of the COVID-19 pandemic.

“Thinking back twenty-five years ago, I don’t think anyone of us would’ve predicted where we are today. Al-Corn is a major contributor to our communities, including providing over 50 well-paying jobs, significant tax dollars, and a valuable local market for our farmers,” said Jorgenson. “While we’ve had tough times over the years, those who invested have received dividends many times over in return.”

The history of Al-Corn Clean Fuel speaks to their founding, which was rooted in a mission to serve their local growers and fueled by their resilience that has allowed them to overcome many obstacles over the years. That same resilience is woven into each and every strategy they employ and allowed them to thrive as a company, while helping their community and the industry along the way.

Here at the Renewable Fuels Association, we believe the evolution of the ethanol industry is one that can be best understood by looking at those who have helped it grow over the past five decades. Al-Corn Clean Fuel is the perfect example of our industry’s robust potential for growth. The Al-Corn story started at the grassroots level over a cup of coffee and reminds us all of what’s possible for renewable fuel producers to achieve. We are proud of our long-time partner and member, Al-Corn Clean Fuel, and look forward to working with them as they produce the next billion gallons of ethanol.